How to make Intel Turbo Boost to reach its maximum for testing cooling efficiency?

I noticed that Intel stock cooler occasionally gets really loud (oh, Intel, why did you make your stock coolers worse; SandyBridge ones were larger and quieter), so I will replace it with a third party silent cooler (no overclocking - I have non-K CPU).

But to find out whether my new cooler and thermal paste is doing its job well, I wanted to capture temperature benchmarks before and after cooler replacement.

I thought - well, I can run a benchmark tool (Cinebench or WinRar built in benchmark) and this would make my CPU work hard and reach its highest temperatures, right? Wrong!!!

When I did that, HWMonitor utility showed that although all CPU cores are 100% loaded, still the CPU hasn't reached its highest frequency and max temperature recorded in HWMonitor history, and also the stock fan was not spinning at full speed and it was pretty quiet. Here's a proof: 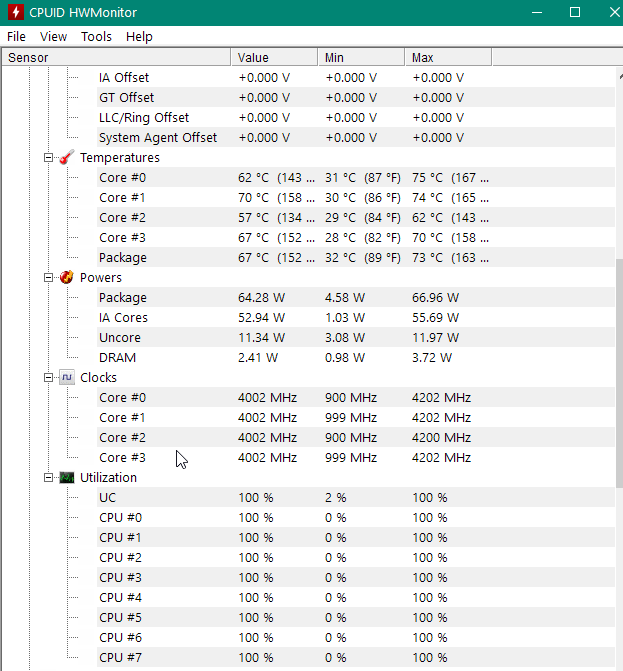 Why so? Because of how Intel's Turbo Boost works. It won't kick in when all cores are 100% loaded; it works at max for one core only (at least, that's what people in forums say; feel free to correct me if I'm wrong).

So, I thought I could load only one core. WinRar and Cinebench both have single core test modes. But it did not work - it just disables multithreading and lets OS distribute the load across all the CPU cores, and thus all CPU cores are loaded partially and none of them is 100% loaded.

Then I tried to adjust Affinity setting in Task Manager - that was kinda success and one of the cores was 100% loaded... but still turbo boost did not kick in fully - no 4.2GHz and fan not spinning at its max.

How do I force the Turbo Boost to its max to stress test my cooling? Is there any tool which can do that? Of course, I would like to do it safely, just within normal working limits; no overclocking etc.

2
core temperature vs CPU temperature
3
Intel Core i5-2467m - Turbo Boost not activating?
0
Meter for Intel Turbo frequency
2
Do the temperatures indicate my laptop healthy?
9
What does the BASE clock speed of an Intel CPU really signify, now that we have Turbo Boost and SpeedStep
0
8700k Single Core Temperature Extremely High
2
Selectively enable Intel turbo boost?
2
Why is my Intel i7-7800X processor overheating so quickly?