Is there any way to make Windows 10 act as a A2DP sink?

Windows 10 has a Bluetooth Stack included and recognizes most Bluetooth Sticks without any problems. However, while Windows does support A2DP, it does not act as a sink and therefore, you cannot e.g. stream Audio from Android to the Computer, which is what I want.

The manufacturer of my BT Stick does not provide any Windows 10 Drivers, since Microsoft does this. I tried the older software, which can act as A2DP sink, but it has a memory leak that crashes my PC after longer sessions of listening to music, which is basically every day (I listen to music while programming/working). (Basically I can watch the non-pooled Kernel memory go up by the second when listening to music and can make it stop by stopping the music)

So my question is, is there any alternative, universal driver I can use that can act as said sink to receive Audio from my Phone on my PC?

If you are running Windows 10 2004 or newer (which you should), download and run the excellent open-source program AudioPlaybackConnector and you're good to go.

Microsoft is re-adding A2DP sink support to Windows 10 in version 2004.

In the codebase of Windows 10 preview builds, references to Bluetooth’s A2DP Sink feature has been spotted again, suggesting that the feature is making a comeback.

However, while Windows 10 BT driver did implement A2DP Sink protocol, you still need an application to explicitly open the connection to your device. Without said application, audio from your device will not be piped to your PC, despite the device might be shown as "ready" in sound control panel. 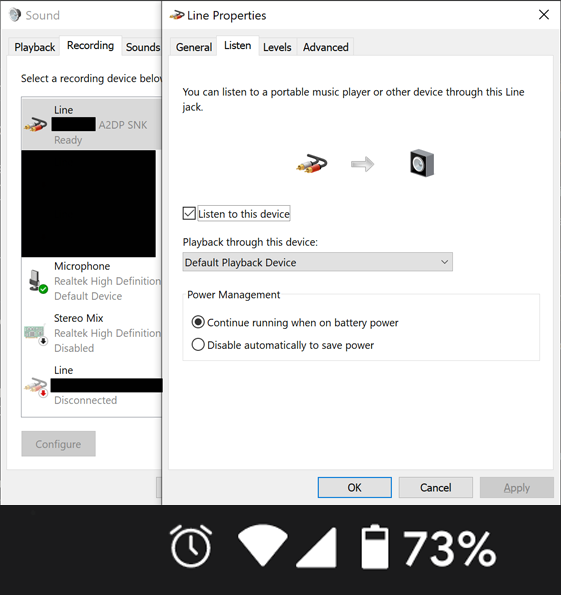 This answer originally recommended a UWP application - Bluetooth Audio Receiver to open the connection. However it had several problems - notably, its window has to be kept open and cannot be minimised to the notification area. It is also not open-source, and only available from Microsoft Store.

Per @mishamosher's advice (thank you), I now recommend AudioPlaybackConnector by Richard Yu @ysc3839. It is open-source and very minimalistic. It also has a more familiar look and feel to the Settings App, which is nice IMO.

After opening the connection successfully, your A2DP source device should show some kind of Bluetooth status. Here's Android for example:

It seems like Microsoft has disabled A2DP sink capabilities since Window 8, or it just doesn't work anymore.

You could try to download and update the audio driver with software supplied by the manufacturer of your Bluetooth card/chip.

If that doesn't help, you could replace the Microsoft Bluetooth Stack with a third-party product, such as :

To summarize our discussion below:

So the only options I can think of are:

Sure, not for everybody, but usable:

Use this on Windows 10 2004 and later versions: https://www.microsoft.com/en-in/p/bluetooth-audio-receiver/9n9wclwdqs5j

I had this problem with a £3.50 ebay dongle, for which I had lost the driver CD. As stated by others, Windows 10 default drivers don't support A2DP sink mode.

The CSR 4.0 bluetooth Harmony software stack solved it for me.

Windows 10 May 2020 update restored A2DP SINK support. I found a tutorial which I am linking down below.

WHAT DO I NEED?

So you downloaded the update what now ? Your have Bluetooth. But how to get it to work?

Now you have successfully connected device as A2DP source/sink.

Now you can use this for recording internal audio or to listen music, there are many more aspects to this as this is useful in can music systems also and some smart devices like Alexa-Dot need this feature for better connectivity with Windows.

If you have Broadcom Bluetooth Chipset, such as BCM20702, you can try the BTW stack from Broadcom: https://www.iogear.com/support/dm/driver/GBU421 (ver. 12.0.0.9980). I'm guessing it implements entire or the most part of the BT stack with its own kernel drivers. Later drivers (ver. 12.0.1+) seems to utilize the windows BT stack and does not ship it's own kernel drivers (Only a very small helper kernel driver is loaded, presumably in charge of firmware loading).

I have success with iPhone 5c+BCM20702+Windows 10 x64 1809, where both A2DP and AVRCP works (There'll be a popup window showing which song is playing with other control buttons). You can even use your computer keyboard as the input device for your smart phone.

FYI: Device needs to be repaired after the driver is installed, you have to "forget" your computer from iOS settings to start the authentication process again.

ganboingganboing
1
Add a comment  |
Highly active question. Earn 10 reputation (not counting the association bonus) in order to answer this question. The reputation requirement helps protect this question from spam and non-answer activity.

Not the answer you're looking for? Browse other questions tagged windows-10 bluetooth or ask your own question.

3
Connect bluetooth headphones both to PC and phone at the same time
2
Why can't we listen to audio using bluetooth head set
2
Windows 7 bluetooth stereo audio A2DP only works when freshly paired
1
Mac OS X: Listen to Bluetooth MONO Audio?
0
Using a phone Bluetooth headpiece to listen to music from computer
0
Why does ubuntu support a2dp but windows doesn't?
13
Bluetooth audio from an iPhone to windows 10 PC (A2DP sink)
0
Windows 10 A2DP Sink connection with a one button bluetooth audio device