For those who don't know, Microsoft released a major update to Windows 10 and one of the changes is that PowerShell replace cmd.exe by default. So e.g. when you open Win+X menu you see PowerShell links and no Command prompt anymore.

Anyway when running PowerShell I get this now: 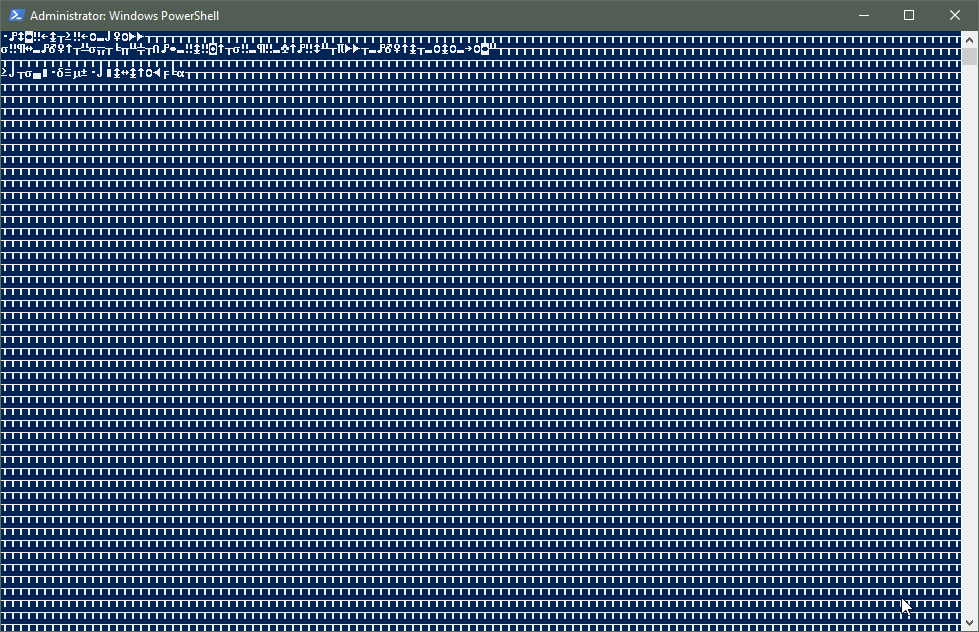 This wasn't happening before the update.

EDIT: Changing font helps, but doesn't solve the issue for applications that does not have a feature to change font. The broken font is Terminal. Replacing it from other source/reinstalling or resetting fonts to default in control panel does not solve.

E.g. opening new fresh copy of Terminal fonts on desktop still doesn't render them, it shows hieroglyphs. So it's like not the font itself is broken, but something in Windows that does not render the font?

Also you can't reinstall .net framework 4.7 on Win10 there is no uninstaller, it ships with windows, all you can is delete dirs, tick/untick in programs and features, maybe run cleanup utility, but doesn't solve the font problem.

This should fix your issue, according to a Microsoft employee which replied to an user on twitter who had the issue.

So open Windows Update and install the update to fix the issue.

The problem is not as bad as it seems. It seems like a problem with a font, which can be fixed by changing the font.

To do that, do the following.

Click the upperleft icon on the Powershell window (the powershell icon) and choose properties.

Go to the tab Font and change it to something else, for example Ludica Console

Press OK. Problem should be fixed.

It happened before. An update affected a MOF file in the build package, the update breaking PowerShell DSC.

The ASCII chars are proof of DSC corruption.

Uninstall and reinstall .net Framework. Also, The .NET framework repair tool may fix the issue. you can get ithere

A SFC scan should also be performed.

If those don't fix it, we'll probably have to wait for an official fix.

Don't bother trying to fix it, it's not a problem in your specific installation, it's a known bug in Windows 10 Version 1703 Build 15063 (Creators update).

A proper solution will only come when Microsoft will release a bug-fix for it. More Details on Microsoft forum

Update: Fixed in the Microsoft insider Fast ring (Version 1703 Build 16193.1001), probably will be released soon to the general public. If you want you can try this fix in the meantime that installs the fixed file https://github.com/ili101/Windows-10-1703-Non-Unicode-Workaround/tree/master

Not the answer you're looking for? Browse other questions tagged windows-10 powershell windows-update windows-10-v1703 or ask your own question.

23
Powershell font wrong size on Windows 8.1
23
Why does running PowerShell change my console font?
1
Recover Windows 10 when login screen flickers and doesn't load
12
How to reinstall .NET Framework 4/4.6 on Windows 10?
4
Change font for non-legacy command prompt in Windows 10 with non-ASCII charset - Properties vs default values?
1
Windows 10: upgrading to Creators Update from 1607 - link in Settings does nothing
0
How to fix a broken character in a System Font - Windows 10
2
Gather complete, historical Windows Update history in PowerShell
0
Font size and font type changes after windows 10 update (appear too large and can't set it back)