In Windows 10 version 1607, it was still possible to defer updates by a few months via the Local Group Policy Editor, but now there's a subfolder containing two entries where it's only possible to defer them by 30-60 days with a maximum of 365 days (timer has to be set anew every time).

Am I seeing this correct or am I missing something?

And what's the difference between feature and quality updates?

After the introduction of Windows 10 version 1703 (released in April 2017), Microsoft provided us with additional options to defer updates within the Professional, Enterprise, or Education editions of their operating system. While you can still utilize the Local Group Policy Editor, now you can also use the Settings app to achieve the same goal.

First, let's establish the difference between a Windows 10 Feature Update and a Quality Update:

Feature Updates - They are actually much more like an entire operating system upgrade than an update and typically provide new functionality. Examples of new features found within Windows 10 version 1809 (the October 2018 Update) include the Clipboard History and Cloud Sync feature, the New Screenshot Tool, and the addition of a Dark Theme to File Explorer. Microsoft has said that "Windows is committing to a predictable twice-per-year feature release schedule," targeting March and September of each year. A Feature Update will actually increment the Windows 10 version number: the original Windows 10 release was version 1507 and was subsequently superseded by version 1511, 1607, 1703, 1709, 1803, and now 1809.

Quality Updates - These provide Windows 10 with security patches & bug fixes, are cumulative, and are normally released on a monthly basis (usually on Patch Tuesday). In contrast to the Feature Updates, a Windows 10 Quality Update will increment the OS build number: Windows 10 version 1803 (the April 2018 Update) began as build number 17134.1, and it has subsequently been updated to 17134.648.

Turning our attention to the Local Group Policy Editor, Microsoft tells us that starting with Windows 10 version 1607 (released in August 2016) the pertinent Group Policies for deferring Windows Updates can be found in the following location: 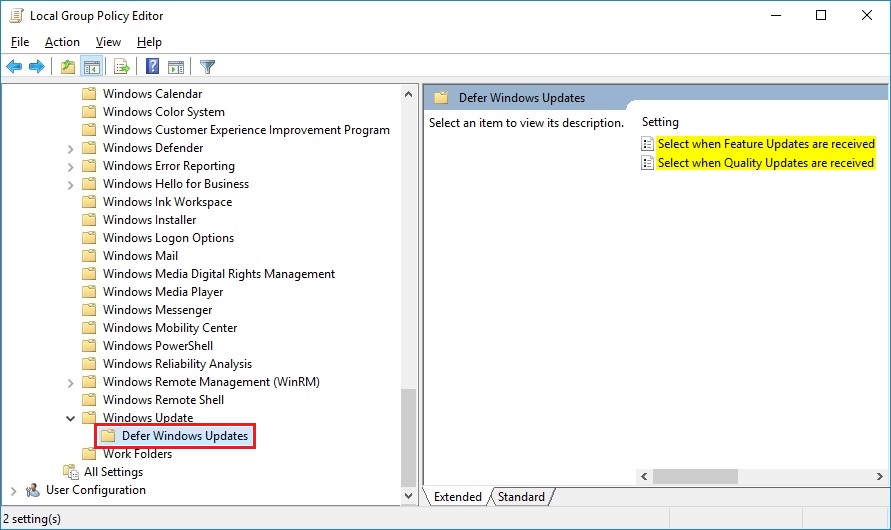 You can easily configure the appropriate settings to defer both Feature Updates and Quality Updates within that interface.

Notably, after the debut of Windows 10 version 1709 (released in October 2017) the hierarchy of Group Policies for deferring Windows Updates was changed to the following location: 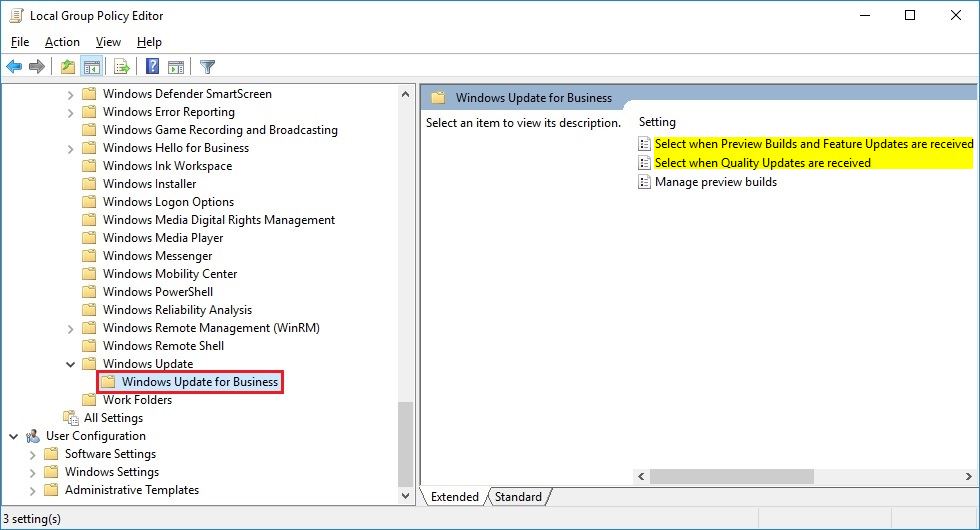 The same options are readily available for both Feature Updates and Quality Updates in the new Group Policy layout, and Microsoft also added new capabilities for managing when you receive a new Windows 10 Insider Preview Build (for those of us who are participating in that program).

As a potentially superior alternative, Microsoft emphasizes the benefits of using the revamped Settings app to achieve the same goals:

Starting with Windows 10 version 1703, pausing through the settings app will provide a more consistent experience:

That being said, if you have the Professional, Enterprise, or Education edition of Windows 10 version 1703 (or newer), you can utilize this new capability to pause updates in the following manner:

How to Pause Updates

Windows can pause updates for 35 days. After the period expires, Windows 10 automatically unpauses, looks for updates, and begins installing them. Windows will need to install the latest updates before you can pause updates once again.

On the other hand, the remodeled Settings app will also allow you to defer updates using the following technique:

How to Defer Updates

To defer updates, head to Settings > Update & Security > Windows Update > Advanced Options. Scroll down and use the “Feature update” and “Quality update” options under “Choose when updates are installed” to specify how many days you want to defer updates for. Set these options back to “0” to stop deferring updates.

Notice that you are also afforded the opportunity to choose between two distinct groups that help determine when Feature Updates will be installed:

By comparison, if you decide to use the Local Group Policy Editor to defer updates you will see the equivalent options in the Settings interface grayed-out, but still displaying your new modifications: 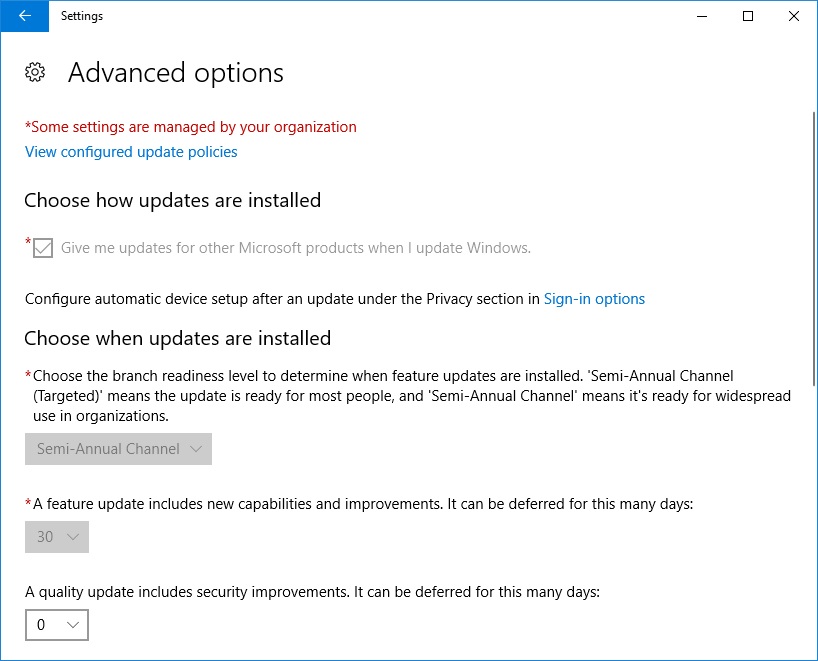 Ultimately the choice is yours, but now that Microsoft has updated the Windows 10 Settings interface to allow you to to pause or defer Windows Updates with essentially the same level of fidelity as the Local Group Policy Editor, it is probably the easier method.

I am not sure if they are working for Windows 10 Home edition. Official documentation for those switches.

2
Choose when updates are installed option missing - windows 10
0
In Win 10 update options, what exactly does “It can be deferred for this many days” mean?
6
Windows 10 version 1703 update ask to remove CheckPoint SecuRemote / VPN
12
How can I defer updates in Windows 10 Home?
7
How to get Windows 10 Long Term Service Branch (LTSB)?
4
How to configure sharing on a small Windows 10 network since HomeGroup is gone?
1
Microsoft Edge doesn't get updated with Windows updates
2
Win 10 1803 update has killed Japanese language keyboard
2
How to cancel a pending Windows Update in Windows 10?
0
Windows 10 Home edition - security updates
See more linked questions