Network drive: "Size on disk" multiples of 128MB instead of reality

I've had a Buffalo LS420D 4TB NTFS network drive for years (no special setup - just whatever was the default as far as I can remember), but I just now noticed that no matter how small a file actually is, if I right-click on it and choose Properties, the "Size on disk" claims to be 128MB! I searched around and found a file whose real size was slightly bigger than that, and yup, the "Size on disk" for that one jumped to 256MB. (Command line dir reports the same as the "Size" line in Properties.) Curious how far the absurdity would go, I asked for the Properties on the folder I know has the most files - an old but massive clipart collection. I had to let it run overnight, but yup, it was pretty hilarious - 76TB! Below are screenshots of the craziness. I'm viewing it with Windows 10 64-bit, if that matters. What's going on? 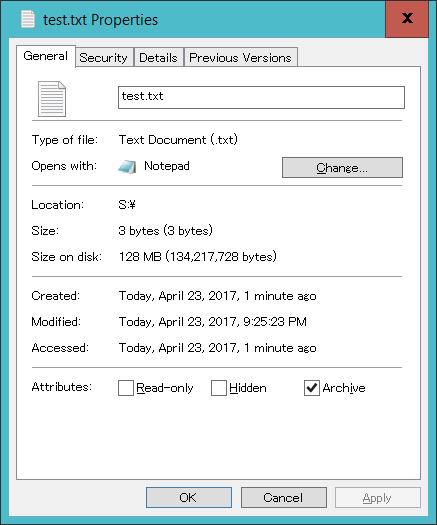 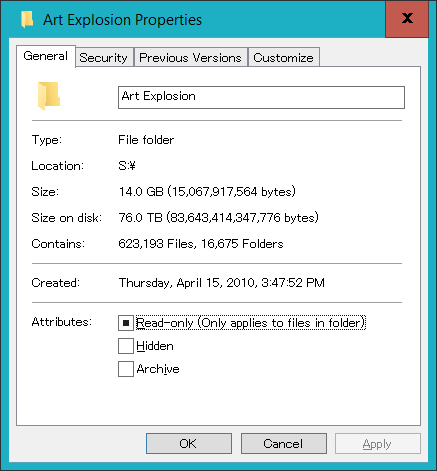 I considered connecting via USB to see if it acted the same way, but I don't have the right cable - the drive's USB jack is Type-A (thin rectangle) instead of the expected Type-B (square with two angled corners), and I don't have a cable with Type-A on both ends.

From your Wireshark capture file, in packet no. 17:

Your NAS is reporting 134217728 bytes, which equals to 128MB assuming 1024 bytes in 1 KB, of allocated size (or 'size on disk') for test.txt. So the problem is on your NAS side. The obvious solution is to update the firmware and/or operating system on your NAS (assuming there is any such update available). If there is no update available, you will have to report the bug to the vendor (Buffalo).

0
NTFS wrong used space count
11
Newly formatted (NTFS) external hard drive already has 'Used space'. What determines the used space's amount? Is it correlated to the HD's capacity?
5
Why is "size on disk" much bigger than "size" when I copy data from NTFS to exFAT?
8
"Size on disk" column missing in Windows Explorer?
120
How can a file's size on disk be 0 bytes when there's data in it?
2
How to determine the actual size on disk for a folder in Windows
1
ddrescue, “size on disk” lower than total size, with possible impact on performance when writing to NTFS
4
Exact files (Copied) have a different size on disk on the same drive?
0
Why is the size (44.2GB) significantly more than size on disk (92.5MB)?