I have a few Bash scripts on Windows and I sometimes copy them from Notepad++ into the WSL (CMD based) terminal emulator (TTY) to execute them.

Trailing whitespaces (Green boxes in nano) are added to each script when I copy and paste it in WSL Nano via this command:

These trailing whitespaces chars aren't part of the script and are actually breaking its execution in Linux, hence shouldn't be in it.

The narrower the WSL TTY window is, the more carriage returns will be formed in pasting.

The script keeps containing these Green boxes when I open it with Nano, which seem not to strip away these characters when the file is saved (as should have been) so one could claim it's a bug in Nano, but in fact Executing dos2unix on the file also doesn't strip the trailing whitespaces. 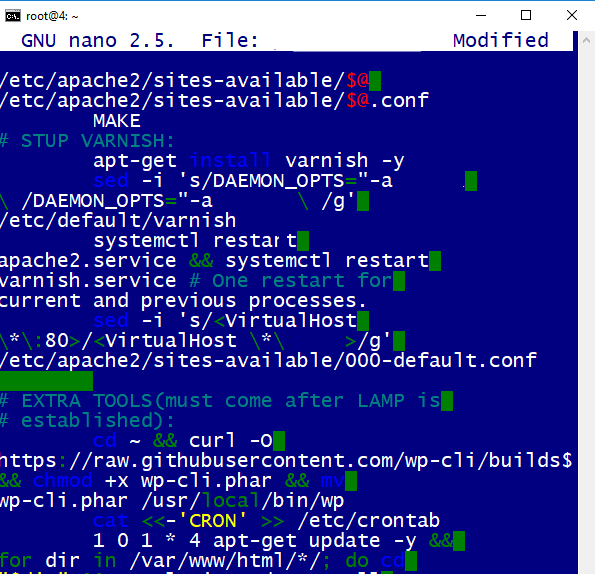 I desire that when copying and pasting Bash scripts (or any other data) from Windows into WSL Nano, no trailing whitespaces will formed in copying.

If you try to reproduce in your WSL:

As you stated, the issue arises from pasting text in a narrow window with Unix line-endings (LF).

As suggested to me by Benno Schulenberg of the Nano development team, adding the following code in the end of /etc/nanorc solved this problem:

On the one hand, this will disable formation of Trailing whitespaces, and on the other hand, will add Line Feeds (LF chars) to the data copied from Windows, so it won't appear in one long row.

(the char before the vertical bar is HTML ␠ or unicode char U+2420(symbol for space).

That space SHOULD (HAS) to be there. If the window boundary wasn't there, then the line would be:

If you are pasting into bash, bash is 'buggy' (a matter of opinion) for pasting due to autocomplete changes made a few years ago. If you have any 'TAB's in your pasted text (yup, indenting), it will invoke bash's "autocomplete" function (I have complained about this but I was told that no one pastes text into bash... cough, cough) (complain on the 'bug-bash@gnu.org list' though I doubt it will be fixed anytime soon). When it invokes the autocomplete -- many time it will swallow the next character of your pasted text because it asks a question:

As a rule, this corrupts pasted text. This used to not be a problem for me, anyway, as my tabs are usually on blank-lines (because they are indenting code). It used to be the case there was an option to ignore code-completion presses on a blank line (@ start of line or when only blanks precede where it is pressed). This was changed to only ignore the completion char on empty command-lines (not an empty tty-line). Pasting multiple commmands into input usually are seen as bash as some sort of continued command -- NOT an empty command line. Needless to say, this causes alot of problems.

An imperfect solution for me was to remap the code-completion key from TAB to Backquote ("") (above tilde key). (same bug occurs if you have in your text, but for me, I use that alot less often than TAB). It's set in your home directory's '.inputrc' file which controls how 'readline' (used by bash to read lines, allow edit, etc), behaves. In particular, a section in my ".inputrc" has bash-specific config options:

Alternatives: 1) convert all your tabs to spaces before pasting, so TAB won't trigger command completion. 2) always write the text to a file and source (.) the file or make it executable and add '#!/bin/bash' on 1st line to make it a shell script.

Theoretically you should also be able to turn command completion off, but I use it too much, so have never bothered to try.

What I usually do now, is I edit the script in 1 window (usually gvim), and in the window where I started gvim, I run successive iterations of the script -- thus avoiding 'pasting'. Certainly wasn't my 1st choice, but bash's corrupting input by swallowing things after a complete-key have pushed me in that direction.

Note, if you report this as a bug, be prepared to offer a solution! ;-) This is the rub:

Same thing happens when you paste commands into bash... some will have tabs where you don't want them...

(P.s. Hope this helps and I didn't completely go off into left field, but when you mentioned 'pasting' and it looks like bash-script...and you mention using tabs (that get pasted in, as well), sounded like the exact same problem I ran into.

Using backquote as a complete key is a bit awkward at times, but, too often will have tabs in pasted text...oh well)

Not the answer you're looking for? Browse other questions tagged bash cmd.exe windows-subsystem-for-linux tty carriage-return or ask your own question.

2
A BASH script that will copy the contents of the directory so long as the average system load is low?
2
rsync: Can it transfer files ignoring size (comparing only timestamp and name)?
1
Expanding tilde convenience paths when using quoted paths in a bash script?
4
curl check if file is newer and instead of downloading - execute a bash (or python) script
92
Windows Linux Subsystem - Accessing Files outside of Ubuntu
5
Using rsync on WSL (Bash for Windows 10) for incremental backups
1
SSH automatically logging out
1
Automatically copy files to hundreds of USB flash drives
1
Wait for a process to complete in Cmder \ ConEmu
2
Migrating from bash to zsh for Mac OS Catalina