I've run into an odd issue with Firefox, and I'm not sure where else to go. Mozilla's own support pages on the issue don't even load either.

The issue started with the update to Firefox 53. Once it completed, the dialog box to Reboot to install 53 popped up. If I click "Restart Now", it does so, and once the program launches again, the same dialog pops up, over and over. 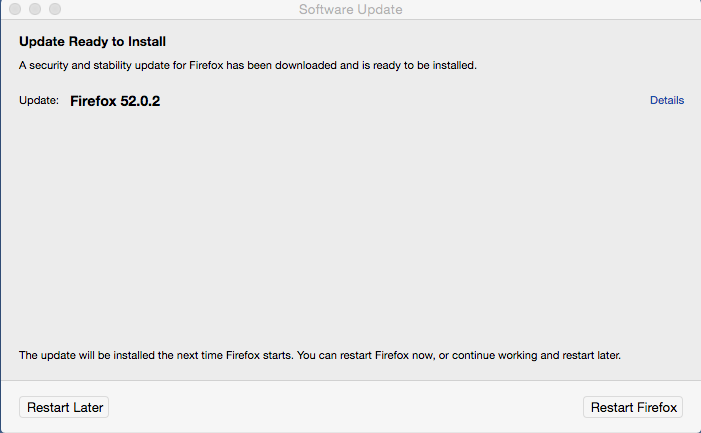 The dialog looks like this, except it's for Firefox 53.

I have tried Resetting Firefox to its default state. I have also completely uninstalled the program by deleting it from Applications, and then reinstalled with a clean download from Safari. Neither of these options have helped.

Is there something I've missed here? It's more of an annoyance than anything, the dialog doesn't do any harm, but I'd like to figure out why it's happening on a clean install too.

Firefox's own support pages are finally back online after their migration to Moz://a.
This link explains my issue and offers the correct solution, which is as follows:

The dialog should no longer pop up each time the program is launched.

0
Firefox podcast downloads won't complete
4
Firefox doesn't recognize my "ALT" keys anymore
2
Firefox extensions are broken
5
Why would my computer suddenly refuse to open one particular website?
4
Why does firefox send TCP packets even when idle?
4
Getting rid of Flash in Firefox (MIME)
1
When launching firefox, it does not show in applications but is showing in processes
1
HTTP links do not open in Firefox
0
Firefox not installing properly in Ubuntu