Can a short-circuit damage a hard disk drive?

Everything was working fine until one day the computer would shutdown a split second after the power button was pressed. All the fans would start spinning and lights would come up and then everything would go dark half a second later. After this happened clicking the power button had no effect. The only way to start again is to unplug the power cord and plug it again.

I suspected the power supply first, so I bought another one, but I faced the same issue. I unplugged everything and reseated the RAM/GPU and hard disk drives. After this the computer booted. I thought I was good to go, but then I noticed my secondary hard disk drive was no longer working.

It was not visible in the BIOS or windows. I replaced the hard disk drive with another one and after a while the original issue came back. So I reseated everything again and was able to boot back up, but to my horror the new hard disk drive was dead as well.

At this point I thought maybe something was shorting the system, so I took everything out including the motherboard from the case, and to my surprise there was a loose screw stuck between the back of the motherboard and the case. I removed this and put everything back together and now the powerdown issue doesn't happen, but I am not 100% sure the system is secure.

Is it possible that a screw causing a short can damage the HDDs? My OS drive was an SSD, and it is running fine. The ones that died are 1 TB regular hard disk drives.

Yes, it's definitely possible. For example, the screw could short the +5V line to the +12V line and fry the hard drive's onboard controller.

A hard drive can fail indirectly: often hard drives which are used for long time tend to fail at next reboot/startup (caused by short circuit or normal power switch).

Other option: a surge from the wall socket or caused by induction after a short-circuit reached the drive electronic or controller (see below).

Note that there SHOULD be all kinds of fuses, diodes, capacitors and shielding that a electrical problem does not spread but cheap hardware is commonplace.

Just to mention it, there is also the problem of (logically) corrupt sectors if power fails while writing. This also should be covered by the drive (rotates long enough to finish write) but might not. Such corruptions might result in transient read errors but could need a disk repair or special tools to refresh the sector.

Typically hard to tell the reason, but a screw connecting the mainboards power lines with the grounded chasis (or with each other) does sound like a probable cause for a short-circuit which induced damage to the disk. (And again, it should not :)

One could say: you have been screwed. :)

However I want to add that your symptoms can also mean that the drive died first and short-circuited the computer or that the PSU was overloaded with the startup current demand from the drives.

I've lost two HDDs due to a short circuit. It was quite spectacular. An integrated circuit at the bottom of one exploded, resulting in a loud bang, a little fireball and a nice crater: 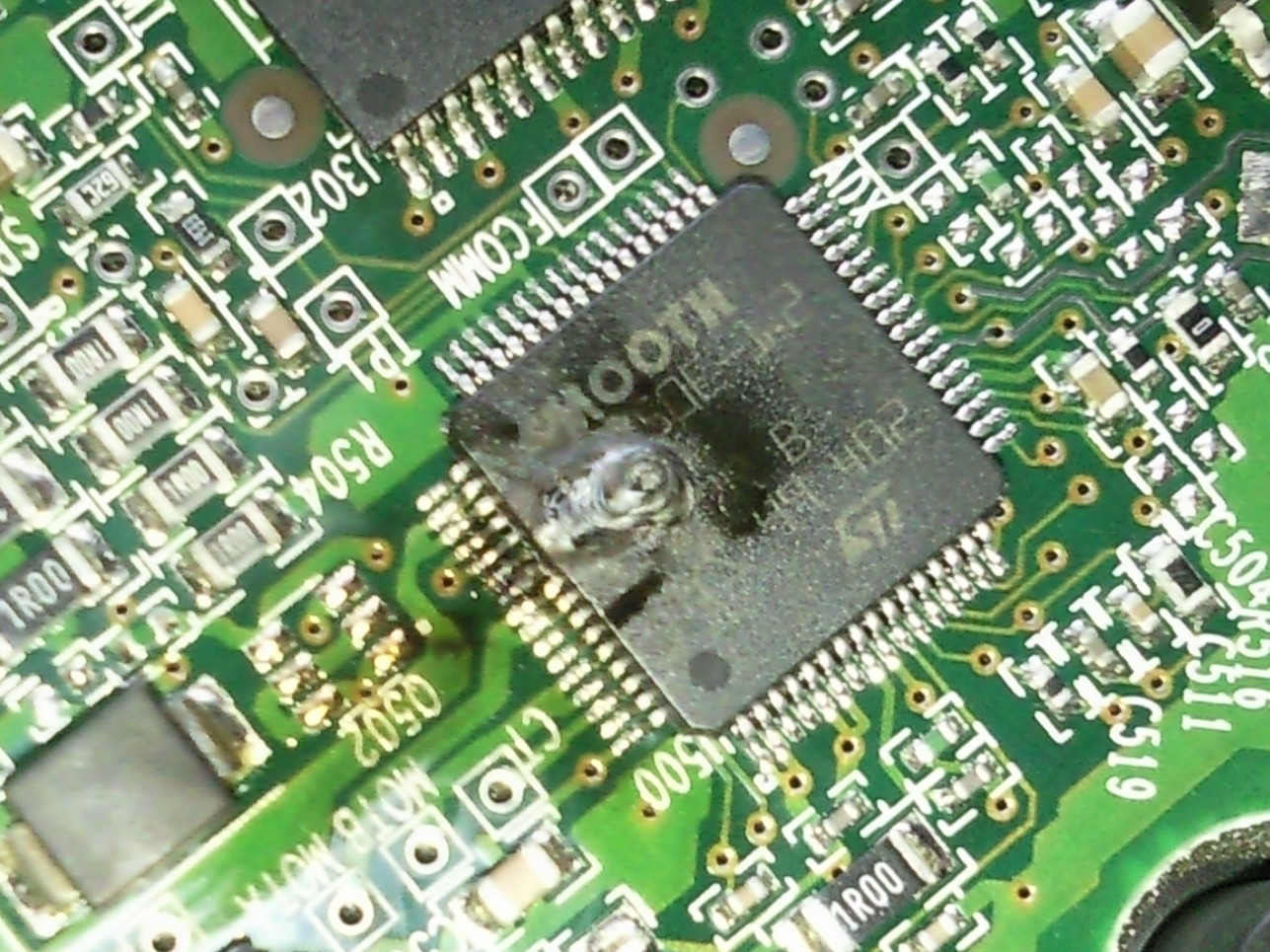 Out of habit and past experience (have fried a lot of mobos ;-)) I insert a sheet of foam between the chassis & motherboard before screwing the board in place. This ensures:

Not the answer you're looking for? Browse other questions tagged hard-drive boot power-supply or ask your own question.

1
Issues with installing 2nd hard drive
1
Dead PC - short circuit?
1
Connecting SATA Hard Disk drive as a slave/seconda disk to a PC?
2
Why would an internal hard drive suddenly short circuit when attached on another PC?
2
Hard disk is always only detected after the computer is switched on the second time
1
Hard Drive working incorrectly
0
Computer claims operating system not found but the hard disk drive is fully operational
0
HP 8300 CMT – short circuit with case
0
PC startup issue: Can a video card short damage a motherboard?