How can I display the  (U+F8FF, Apple logo) character on Windows?

In Apple's marketing materials, the company often refers to the Apple Watch as "Watch". If that last sentence displayed as "

To demonstrate, here's what the Wikipedia page for Apple Watch looks like on an iPad.

Here's what that same section looks like on Windows 10.

Occasionally, you can even see this happen on Stack Exchange when browsing Ask Different.

Is there any way to make the Apple logo  display properly on a Windows PC?

Edit: It's worth noting this issue happens in Google Chrome, Firefox, and Microsoft Edge, though the symbol looks different in each browser.

In Firefox, the character appears in a box with the hexadecimal characters F8FF. U+F8FF is a private-use character code point, intended for specific applications that need to display specialized characters not specified by the Unicode standard. For example, a website's custom typeface may assign site-specific glyphs to private-use code points, and a mobile device's own fonts may use the code points for their own purposes.

These characters are by their very nature application-specific and most likely will not render correctly outside their source application.

The real question to you is, for what purpose you need it?

This character is Unicode F8FF, which is in the Private Use Areas and is not defined by the Unicode standard what it should be. So Apple in their own systems uses a font (or fonts) in which they placed the Apple logo at the F8FF location, but on Windows systems no normal font has this symbol, and certainly not in the same exact location.

So the answer to the question on how to display it in your browsers, the answer is that there isn't really a way to do that.

However - and here's where I add more than previous answers - if you just want to use this symbol on a Windows machine in different programs for typing and printing, there is a way to got the same symbol. Here's how:

Note: this is not using the same F8FF glyph that Apple's fonts use, but instead it has the same symbol in a different Private Use Area, F000.

The other answers already explain why you cannot display U+F8FF as an Apple logo on non-Apple systems. But for future reference:

If you would be in control of the website (which you're not on Wikipedia, nor on Ask Different), then you could add a web font to reliably display such icons on that website.

The well-known Font Awesome includes the Apple logo as fa-apple:

This will work in all modern browsers; you can have a look with yours.

In Font Awesome, the code point is not U+F8FF but U+F179, and fa-windows is U+F17A (both also in the private use area, like explained in other answers).

Windows comes with an application called Private Character Editor. Open it, select the code F8FF from the last line and the last column and then draw in your own Apple logo as well as good or bad as you like.

You may have to restart the browser for the font to start working. 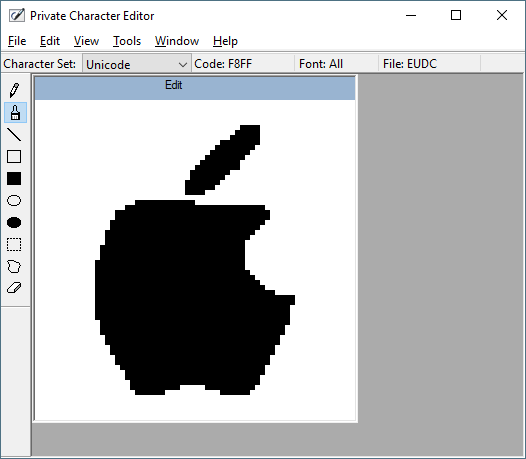 I'm reading the question as if you go to the Wikipedia page—you want to see the the correct glyph displayed on your screen. To do this, I think you would have to find a font or create your own font with the Unicode point U+F8FF displaying the glyph, then install it into your font folder.

However this would mean if you go to a different Web page or an internal application which used U+F8FF - you would again see the Apple logo even if it was not appropriate.

For the question of which font you could use look at Which (default) fonts contain the Windows/Apple logo? which would then lead to exporting the Macintosh font and importing it into Windows - I don't have an Apple so I have not looked for an answer to if that is possible.

U+F8FF in range of ConScript Unicode Registry, a volunteer project to coordinate the assignment of code points in the Unicode Private Use Area for the encoding of artificial scripts including those for constructed languages.

U+F8D0–U+F8FF is range for Klingon alphabets, and some fonts support it: code2000 font, constructium font, etc.

U+F8FF is "Klingon Mummification Glyph", and I see it in your question:

So, U+F8FF is really not good idea for company logo =)

I'll assume you're using Edge as that comes with Windows 10 out of the box. If that is true then I believe your issue is with edge and not Win10 at large.

Edge comes with little to no accessible font options/settings. This has to do with it's branding/status as a 'metro app,' which is only relevant because in most other fully featured browsers (incl. IE11) you'll find options to set how fonts are displayed and whether or not to force custom fonts or to allow a website to decide it's own font. The issue here is that the sites your viewing are attempting to display a font that windows 10 may not have. In this case I can confirm that in the case of Win10 pro that Baskerville Old Face is included and I believe that if you attempt to view this within a different browser you will see the apple logo render properly.

Not the answer you're looking for? Browse other questions tagged windows unicode or ask your own question.