I have a Sony Gold Wireless headset and it works perfectly fine, the only issue is that the windows volume Control (the slide in the task bark) doesn't affect it at all. So in order to change the volume i have to either use the built-in buttons of the headset, or whatever software am currently using, this is not a critical issue but am very used to the volume buttons i have in the keyboard (specially the "Mute" button).

What i tried so far :

I also tried using the "troubleshoot tool" and updating the driver, nothing solved this issue, because like i said, the headset is playing Sound correctly, its just that somehow it overwrite windows sound control or something.

Also did some comparison with my Razer headset and i noticed something a bit weird,

In my other Windows-10 pc, when playing AC/DC - Highway to hell solo on full volume, the playback device volume bars looks like this :

Playing the exact same song from the exact same source (Spotify) with full volume and also with the Razer headset, the volume bars don't get passed "4-5 bars" even thought that in my ears it's as loud as the other computer :

I have no idea if this can help or even if it has any meaning but I just noticed that its kinda weird, even when i use the speakers the volume bars are always limited to "4-5 bars".

But again, my main issue is that i want this slider

to work, Cause even that its set to Mute, Windows is still doing a tons of Sound.

Totally forgot to say that am running :

Another thing that i forgot, using the volume mixer has some strange results too, changing the volume of an individual software works perfectly : 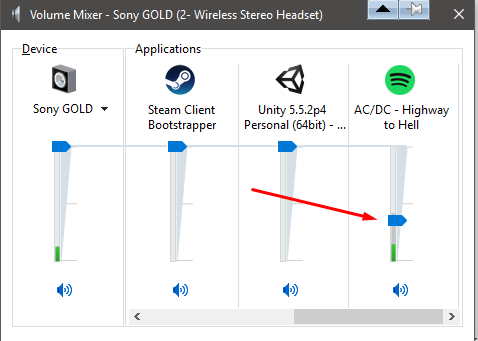 I was able to reduce Spotify volume to ~30%. 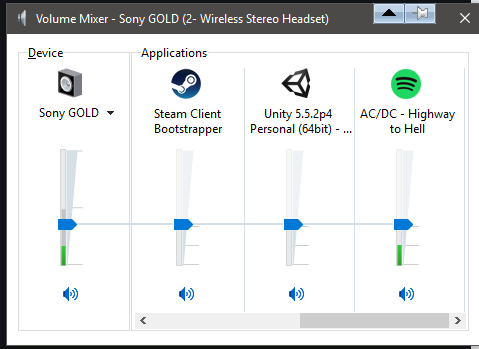 ,and as always, absolutely no effect, even when its muted.

Got the same problem, but I managed with a workarround to make the media keys to affect the sound.

I installed the NirCmd, a nice utillity for windows where you can run a specific command as change the volume for a specific application (or the current one). What I did:

Then, using the AutoHotKey app, I created this config:

Not the answer you're looking for? Browse other questions tagged windows audio bluetooth headphones playstation or ask your own question.

5
Change the audio device which the keyboard volume keys control