I am looking at purchasing a new wireless router. Something around 150-180 bucks and I noticed that some models advertise MU-MIMO. Some say that they have 2x2 MU-MIMO, others 4x4 MU-MIMO.

I read a bit about this technology and I think I get it when it comes to routers. This MU-MIMO helps the router talk to more devices simultaneously. However, some laptops talk about MU-MIMO too and the ones I've seen mention 2x2 MU-MIMO.

Boy this acronym is funny. I keep thinking of mimes and clowns when I hear it.

MU-MIMO is a wireless transfer technology that has two purposes:

Devices like laptops with Windows or Mac OS, smartphones, tablets and so on, can also include support for MU-MIMO. Most consumer devices offer 1x1 MIMO, 2x2 MIMO or 3x3 MIMO. These numbers refer to the number of antennas and the number of streams they can use to communicate with the WiFi router.

The diagram below helps show the number of streams broadcast by a 4x4 MIMO router and how they can be used by devices with MU-MIMO support. 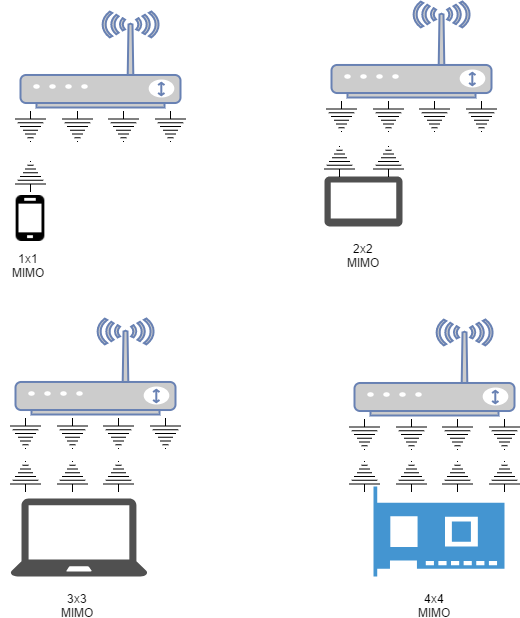 As you can see, a router with 4x4 MIMO can simultaneously talk to four devices with 1x1 MIMO, two with 2x2 MIMO, one with 3x3 MIMO and one with 1x1 MIMO, or one device with 4X4 MIMO. If you want to learn more about this technology for wireless transfers, read this guide: What is MU-MIMO WiFi? Do you need it on your router?. Unlike many others that you will find online, it also explains in detail how the MU-MIMO support works on devices that are connected to the network, not only on wireless routers.

I feel like the answer from "Corporate Geek" wasn't clear enough at distinguishing between basic MIMO, which has been around in Wi-Fi for a decade (since 802.11n in 2007) and MU-MIMO, which is fairly new, as of second-generation 802.11ac devices (marketers call these "Wave 2" devices, even though "Wave 2" has no formal definition in the standards).

MIMO stands for "Multiple Inputs, Multiple Outputs", and refers to using multiple transmitter and receiver radios (radio chains) per device to improve wireless performance. The extra radio chains in MIMO radios can be used in either of two ways:

Both the transmitting device and the receiving device have to be capable of a given number of spatial streams in order for that number of spatial streams to be used for transmissions between those two devices. So if you have a 3x3:3 AP (3 transmit radio chains, 3 receive radio chains, capable of 3 spatial streams), but only a 2x2:2 client, then when that client and that AP are talking to each other, they can only use a maximum of 2 spatial streams. The AP will still use all 3 spatial streams when talking to 3x3:3 clients, so the mere presence of a 2x2 client on a 3x3-capable AP doesn't force everyone down to 2x2 or anything like that (there's a longstanding myth among Wi-Fi users that slower/older/previous-generation clients force the whole network down to using the slower/older/previous-generation technologies, but that' simply never been true).

MU-MIMO stands for "Multi-User MIMO" which is a way for a device, typically an AP (wireless router), to transmit more than one packet simultaneously, to different receiving devices. This is done by dividing up the multiple spatial streams so that different streams transmit the packets for different devices all at the same time. For a device to be able to transmit multiple packets simultaneously via MU-MIMO, all of the intended receiving devices must also be MU-MIMO capable.

As "Corporate Geek" mentioned, MU-MIMO can divide up the spatial streams multiple ways. For example, a 4x4:4 MU-MIMO AP could transmit as many as 4 packets at the same time, each using a single spatial stream, if there were 4 MU-MIMO-capable clients on the network, and the AP already had at least one packet ready to transmit for each of them.

Note that for MU-MIMO to actually be used for a given transmission, your AP and at least two of its clients must support it, and the AP must have queued up, and be ready to transmit, packets for at least two of the MU-MIMO-capable clients at the same time, and the AP must have determined that, given the lengths of the packets and the MIMO spatial stream capabilities of the intended recipients, that employing MU-MIMO would be more airtime-efficient than sending the packets separately back-to-back.

MU-MIMO capable clients are still pretty rare in my experience. No Apple products (Macs, iPhones, iPads, Apple TVs, Apple Watches) support it yet, and few Android phones or PC laptops do either, as far as I've seen. I haven't even seen much talk about MU-MIMO-capable USB dongles for aftermarket upgrades of laptops. So the installed base of MU-MIMO-capable equipment seems vanishingly small to me at this time.

Devices without MU-MIMO (called single-user MIMO, or SU-MIMO) will continue to communicate with the router in a round-robin fashion. This is formally called time-division multiple access (TDMA). Any MU-MIMO devices can communicate simultaneously on the same time slices, thereby increasing total throughput. To illustrate this, let's take a home network with five 802.11ac client devices:

The following table illustrates what would happen on a quad-stream (4x4) router that does not support MU-MIMO, when all devices are communicating simultaneously.

Notice that it takes five time slices to service five devices talking at once, with some spatial streams completely unused. This means wasted bandwidth, with only 35% of the theoretical bandwidth actually usable. On larger networks with dozens of devices, this can be a serious problem, especially when you consider that 4x4 MIMO clients are rare.

Now let's see what happens on a quad-stream MU-MIMO router, in an ideal situation:

The above examples assume that all devices are all communicating at the same time, and that all transmissions are of the same size. The full benefit of MU-MIMO can only be realized when all devices on the network support MU-MIMO, since legacy SU-MIMO devices cannot share time slices the way MU-MIMO devices can. Also, we're ignoring the effects of interference, client distance from router, or other environmental or technical factors, so real-world performance will not look exactly like this.

How-To Geek has a simpler explanation of this technology, but it doesn't cover coexistence with SU-MIMO devices.

0
Dualband WiFi adapters/routers
0
How to make DD-WRT router's (configured like a repeater) devices be accessible on LAN? (i.e. integrate DHCP for both routers)
6
Is a MIMO 2x2 wireless access point the same as a dual-band access point?
5
Multiple Wi-Fi routers and seamless roaming
2
What does the link speed of a WiFi connection depend upon?
0
What is the speed and detail operation when several devices do a Speedtest in an MU-MIMO router simultaneously?
2
Do non mu-mimo devices benefit from mu-mimo router?
1
How can I connect to my Wi-Fi AP at 1300 Mbps link speed?
0
How do MU-MIMO and beamforming work together when they have seemingly opposite goals?