Hard Drive Clicking, But Not Dead

I have in my possession a Supermicro X7DBE which I acquired from a friend a couple years ago and had operating until this year. After I went back to school in August, I was forced to put it into storage. It's been 8 months since it's been in use, and I'm having an issue returning it to operation.

To return it to function, I first installed the same hard drive I used with it before its decommission, a Seagate Barracuda 1TB that's around 3 years old. After booting the Supermicro copmuter, the hard drive started making a clicking noise and the hard drive became available only intermittently. The clicking sound seemed like the drive was repeatedly spinning up then shutting down immediately. I assumed the worst: that the hard drive was dead. However, when I popped it into my desktop computer to verify my assumption, lo' and behold, it worked perfectly: no clicking, no intermittent connection.

If it wasn't the hard drive, I thought, perhaps it was an ATA controller (Southbridge) problem. I found another spare hard drive, a Western Digital generic 80GB that's over 10 years old. If it were the southbridge, I'd have similar issues when using that drive, but that was not the case. The drive performed fine in the offending computer, as old as it is.

So, the Seagate 1TB hard drive functions normally, but does not in the Supermicro computer. I went through the BIOS and ensured that no settings would get in the way. I even reset the BIOS settings back to factory, with which the same drive had functioned under before. What could be the issue? What other information might be relevant for diagnosing this issue? 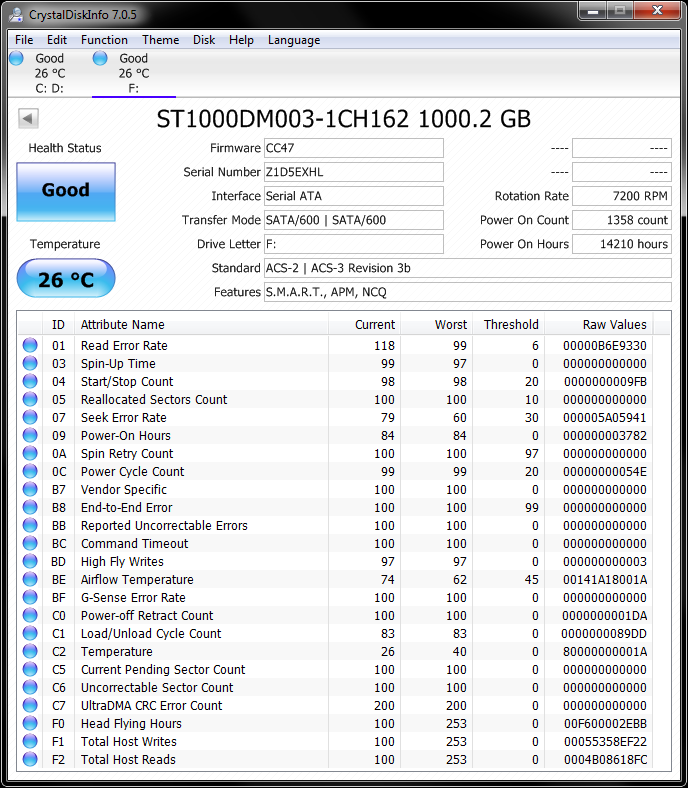 This information is more valuable than any diagnostic you can perform.

The fact the drive continues to run shouldn't cloud your judgement about its impending failure.

A normally operating drive doesn't click. Ever. Failing drives click. It's only a matter of time. Every PC technician that's worked with enough hard drives has seen this play out. It always ends with the drive failing.

It happened to me just a couple of weeks ago. First the PC didn't start properly once. Then it was fine. Then it didn't start again and the drive was heard clicking. A firm tap on the drive "brought it back to life" and the machine worked fine for a few weeks.

Then the drive died.

Your hard drive is failing. I suggest you back it up now.

Your SMART values (100 is fine, lower is worse, below threshold means it's close to failing) state that you have seek errors. That's the clicking noise your hear: If the harddrive cannot find a track, it moves the head back against a "bumper", so it clicks, and then it tries to find the track again. This takes time, especially if it has to repeat that, so it starts to react slowly.

If it works better in one computer, but worse in the other, that may have something to do with how it is built in, slight orientation difference, how much it was shaken during the replacement etc, the temperature etc. If the head drive mechanics are failing, that can make a difference.

Anyway, your drive is on the way out. Back it up as quickly as you can, get a new drive.

Not the answer you're looking for? Browse other questions tagged hard-drive hardware-failure or ask your own question.

0
Is there any hope for this hard drive?
0
Sporadic disk clicking sound
3
Hard drive works intermittently but stalls on a specific sector
0
System will not boot when certain hard drive connected
0
Laptop making clicking sound — is it really hard drive failure?
0
My hard drive is buzzing
2
Can I change HDD PCB to try fixing a dead HDD?
0
Hard drive issues after setting to offline and disconnecting the hard drive