I have a table filled with datas that comes from other tables. The formulas in the cells of my table are quite simple (reference to a cell in another worksheet). 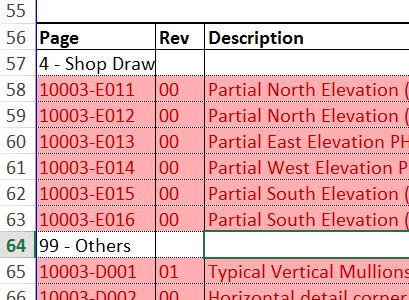 In my table, I have "Title" rows (rows 57 and 64 in that case) that contains only one text value that I would like to overflow to adjacent cells since the adjacent cells in those rows will always be empty.

If the values in the table where entered manually, there would be no problem and the cell would looks like exactly like I want it as in the image below. 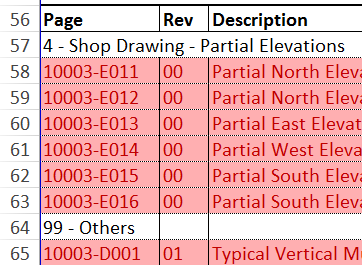 The value of the first cell in row 57 does not overflow because the adjacent cell containt a formula (the formula is basically "=OtherCell" where OtherCell does not contain any value (more specifically, a value of ""))

It is important to note that the position of the "title" row changes and occurs in many rows in the table since the data are automatically extracted a database.

How can I achieve this...

The short answer is: You can't.

The long answer is that only truly empty cells will allow text from the next cell to the left to spill over and display in that cell.

This is just how Excel works.

If you specifically exclude manual intervention, deleting formulas, as well as VBA, there's really nothing left other than accepting the defaults, which is that a formula in a cell to the right will prevent text from spilling over to the right.

Using VBA, you can void cells containing a formula that yield nothing :

If you reallllly wanted to do it, sort of,you could make a complicated formula for the leftmost cell that should handle it. It would not let the table's data be used directly in further calculations, and the second and third columns would not really be used which might disturb a user. But it'd work to show the data AND the full entry in the first column. One could remove them, which might make it more palatable to users.

Since there are explicity numerical entries and alpha entries in the first column, but NO alphanumeric entries, one could first test for that with ISTEXT(). If NOT, then one has the current formula for that column AND the formulas for the second and third columns. One would need toTEXT()` wrap each and add spaces as required for appearance, but the look could be achieved, though with a fair bit of work.

If the test succeeds, then the cell simply has the text result it now has with no reading of the second and third columns, as they have nothing, as I understand it.

If one used a given number of spaces between first/second and a different number between second/third columns, that could be a reliable basis for pulling the data from the table for use elsewhere.

However, if being used elsewhere, one could also simply use the formulas used to poipulate this table directly, not looking up something in the table, but rather doing the first level lookup in the source data. So a direct lookup rather than a lookup in already looked up material. A bit "cleaner" in a way.

36
When does Excel decide to overflow text into adjacent cells, or cut them at the boundary?

2
Advanced cell selection in Excel
36
When does Excel decide to overflow text into adjacent cells, or cut them at the boundary?
3
Conditional formatting Excel 2007/2010: Highlight the first cell in the row that contains duplicate values?
1
Excel 2010 Table auto expand/formula copy not working
0
Make a formula that has specific-cell-references change every n'th row in Excel
0
Making a table with smaller tables from other sheets
0
Change the formatting of a cell depending on the value of that cell and another cell
1
How does Excel determine default cell formula when a new line is added to a table?
0
INDIRECT formula not working with deep cell lookup