I'd like the computer to beep on the hour without having to install an entire third party software just for this.

I tried using Task Scheduler for this, following the steps outlined here, but when I set the task to run a program so I can play a chime, like this...

...It doesn't work (nothing happens), even though it works on the Run dialog. When I explicitly click "Run now" (it's first set to run on a scheduled time), also nothing happens. And when I set it to display a message or send an email instead, it displays an error which apparently means the feature's been deprecated (and the method on that website didn't work either).

So, is there any way to achieve this natively on Windows 10? When I used a Mac, a few years ago, all you had to do was check an option telling the system clock to chime on the hour. I don't get why this VERY SIMPLE AND USEFUL THING needs to be this difficult.

Here is a solution which:

Save the following code somewhere on your computer with a vbs extension (for example, play_sound.vbs):

Change the C:\Windows\Media\Alarm01.wav to the full path and filename of the sound you want to play. I've tested files ending wav and mp3 and they work fine, there are probably other formats which work too.

Double click on it and you'll find the sound plays.

Now all you need to do is create a Scheduled Task to call this script every hour on the hour.

Finally, if you're interested, here is a page where you can download the hourly chime that comes from those retro Casio digital watches.

In Windows 10. You have built-in app Alarm & Clock.

To set up a new alarm, select New + . Select the item under Sound to choose the alarm sound that works best for you.

Set alarm for everyday at time you need. Example (7am)

Set the Snooze time to One hour. (So u will get alter every one hour)

Once the Alarm altering you. Only you need to click on Snooze 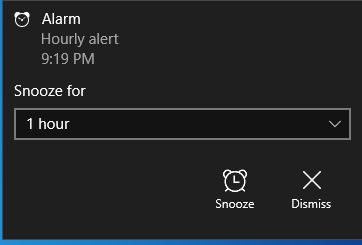 If you use the full address of wmplayer.exe then it works. E.g. C:\Program Files\Windows Media Player\wmplayer.exe.

Your WAV argument is fine.

The only problem you'll have with WMP is that it no longer supports automatically closing after playback so your scheduled task can open WMP and play your sound but you'll need to write another Scheduled Task to close WMP a few seconds later as it'll remain open and it won't play the sound again...

You can use VLC player as it has a command line switch that can close the player after it's finished playing. The switch ic vlc:\\quit.

To be brutally honest, you're best looking for an application that will run in the system tray that can play a sound at your preferred interval and it'll probably be more reliable than launching a resource thirsty application for a simple "chime".

In addition to previous answers, here's a powershell script that can be run from the task scheduler. Save it to a file with a .ps1 file extention.

No User interruption needed means he can rather use VB Script

Paste in Notepad Save as .vbs (Example: Hourly.vbs)

Makes sure you have sndrec32.exe is downloaded and placed in system32 folder for windows 10

Well all I can do is tell you what worked for me in trying to find out how to disable the chime alarm that played every hour on the hour. It drove me nuts quite frankly but if that is what you are looking to have, you can find it in W10 under the Gadgets called "Date Time." It is a small, thin bar that is displayed on the desktop which shows the date & time. The options function gives you the choice of having an alarm sound every hour. You can do this by clicking on the config tab, then checking the box that says "Hourly Notify -- enable?" By enabling this the computer will chime every hour on the hour. Hope that helps. This is the easiest way to be reminded that each hour has arrived. Enjoy!! :)

user942316user942316
1
2
Add a comment  |
Highly active question. Earn 10 reputation (not counting the association bonus) in order to answer this question. The reputation requirement helps protect this question from spam and non-answer activity.

1
How does scheduling work?
3
Scheduled task with custom weekly schedule does not run
1
How to get a program to run at startup or logon in Windows 8 - with Administrator privileges - exactly as though app icon was double-clicked?
0
Setting a scheduled task in Windows 10
1
Task Scheduler doesn't start my exe for the next day
0
Windows 10 Home Edition Scheduled task won't run with admin privileges
0
How can i set my computer to beep once every hour after i booted it without using external software?
0
Windows 10 2004 Task Scheduler refuses to run task (silent failure)