Unable to connect to remote PC

I am using my MacBook to connect to my PC. Both of these two computers are on the same network. My PC is connected to via Ethernet cable and my MacBook is connected to my wireless on the same network.I believe I have done all that was asked of me in order to establish the connection to my remote machine. However, I have been unsuccessful after weeks and weeks of trying and it is definitely getting on my nerves. I keep getting the same message, that says:

Unable to connect to remote PC. Please Verify Remote is enabled, the remote PC is turned on and Available on the network, and then try again.

I have searched on this forum and went over every similar question with no success, my remote PC is on the same network and it powered ON. I have uninstalled and re-installed the RDC software the one by Microsoft on my Mac, even updated to the latest update today. What I am possibly doing wrong. My Ipad actually connects to my PC quite easily but my Mac can't. Can anyone please help me?

From comments, only the recommendation of the current RDC beta seems to have done the trick, but I'll add the checklist anyway, for future Googlers.

This assumes that actual connectivity between the two has already been tested, by ping, arp etc.

Make sure Remote Assistance is enabled & that in Advanced that remote control is also checked.
For testing, set to Allow connections from any version of RDC. Once eliminated as a cause, switch back to Authenticated. 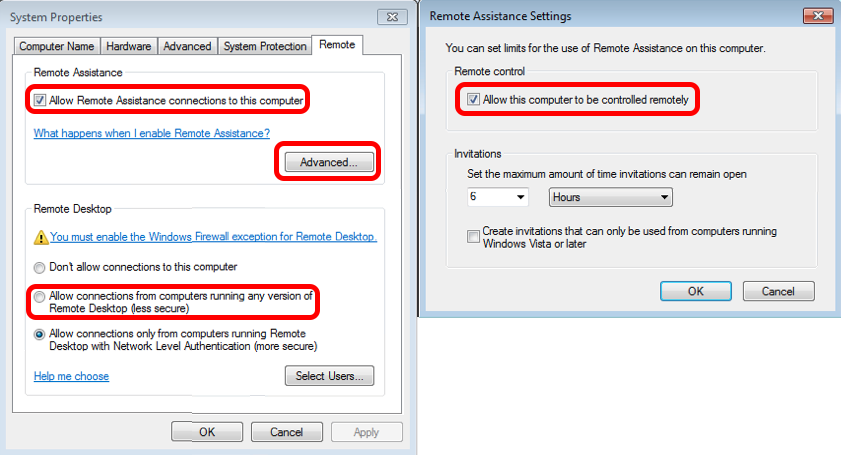 On the Mac, use the remote PC's IP address rather than host name, which eliminates any potential for the network's Master Browser not being up to speed on host names [decidedly more likely on a mixed-platform network, as Macs can often win the Master Browser election even if they were not supposed to]

Also, make sure the credentials used from the Mac are already authorised on the PC; an actual Admin account on the remote.

If all else fails, then try the new RDC beta [which has now been in beta for over a year & is superior to the current release in many aspects]

This MS Technet link always goes to the latest beta release, hosted on HockeyApp, & updates are semi-automatic after install.

Not the answer you're looking for? Browse other questions tagged windows-10 mac remote-desktop or ask your own question.