I was facing some issue where wifi is losing internet access within few minutes after connecting. So I did a driver update with driver update software and it update the atheros wifi driver. Still I was facing same issues. So, I downloaded wifi driver from sony website and installed it. After that when I switch on wifi, I cannot find any networks. Also vaio smart network won't let me switch on the wifi but I can switch on bluetooth. So I have found some more related wifi drivers from other sites and installed them after uninstalling existing ones. I have also uninstalled smart network program in between and reinstalled to see if it is causing the problem. 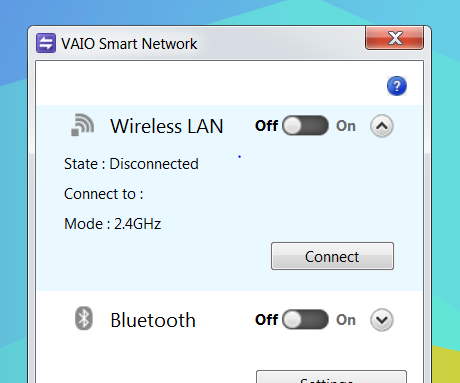 I have tried system restore but computer is unable to do that. I have tried installing the driver provided by sony website but still same issue. Model : VPCEB36FG. How can I make my laptop wifi work? Please help me. I am not interested to reinstall my OS. Btw, does OS installers have wifi driver or should we install it after OS installation?

Okay first,make sure ur wifi is enabled.by pressing fn button + any f button(in my case it f12)

second try driverpack solution to make sure u having a correct driver.find that at google

Not the answer you're looking for? Browse other questions tagged windows-7 networking wireless-networking drivers or ask your own question.