Is it preferable to disable APM, or to enable Load Line Calibration for overclock stability?

Since APM sets a predefined TDP limit it is usually recommended to disable both AMD Turbo Core Technology and APM features when increasing the CPU frequency and voltage above the default levels.

Ron's Tech Tips also has this to say:

In a nutshell, AMD Application Power Management BIOS setting ensures the CPU stays within the 125W (8 core) or 95W (4 and 6 core) TDP the chip was designed for. I have seen many say that APM causes the CPU to throttle, this is both true and false. It is true that sometimes APM causes this, but throttling is not what it always does. there are times where it will slightly lower voltage while keeping the CPU at a higher clock rate.

All emphasis are mine.

Vdroop is a drop in voltage supplied to the CPU as load increases; basically when you go from idle to load, the voltage would decrease. Given the small voltage tolerance that overclockers are working with (increased voltage is proportional to the CPU frequency/multiplier that an overclock can achieve), a droop in voltage applied to CPU can make a theoretically stable overclock unstable (dropping the voltage below that required to achieve the set frequency)

The following is the difference between defined (X) and measured (Y) vcore values without LLC: 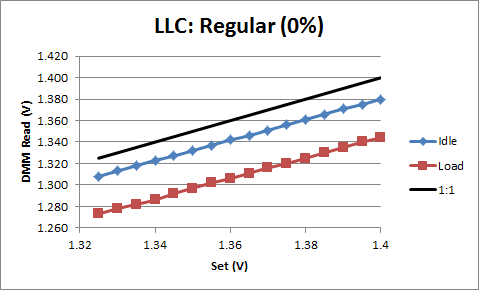 Notice how the actual vcore value is always below what we expect.

In the next image, we can see that for that specific CPU (i7 3930K) and MoBo (Asus Rampage IV Extreme), an LLC setting of "High" (meaning a value of 50%) is enough to compensate for vdroop: 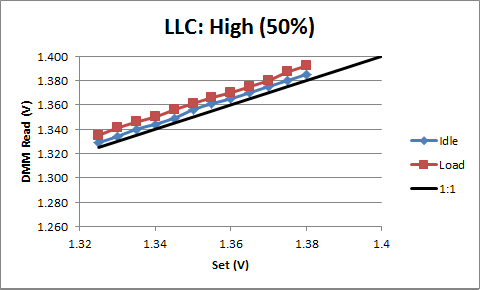 What I'm wondering is whether it is preferable to disable APM, and (most probably) settle with a lower LLC level (sometimes it's not needed at all), or to keep APM enabled and having to resort to a higher LLC setting to keep everything stable. My concerns are, in that order:

(Additional info)
The reason for asking this is because a higher LLC setting introduces short voltage spikes to the CPU core, as already noted in this question: < Is it better to use an offset or manually set CPU voltage (with respect to CPU longevitity)? >, as well as in this Master's Lair post. Quoting:

If you have a decent motherboard, load-line calibration really doesn't buy you anything in terms of a higher overclock (...). It only artificially lowers the vcore that you'll have to set in your BIOS, but the CPU will still require the same amount of voltage when it's put under a load.

I'd recommend leaving [LLC] disabled unless you think that you're having a hard time achieving the overclock that you wanted and suspect excessive vdroop to be the problem.

On the one hand, I suspect APM does more than "just" enforcing an overall TDP ceiling and thus should rather be kept enabled if possible, despite suggestions to the contrary. But on the other, it also appears APM would introduce instability and thus require a higher LLC setting, which would itself be probably worse.

Still according to Ron's Tech Tips:

All disabling APM does really is cause your CPU to run outside the 125w TDP range. In essence, your drawing more power and voltage, and creating more heat for very little benefit. (...)

The only time and situations I would recommend Disabling APM(Application Power Management) (...) is if you have:

Nothing here indicates that APM has any impact on system stability, although the previous quote (from the question) appears to indicate so ("there are times where it will slightly lower voltage while keeping the CPU at a higher clock rate").

So I tested this myself for the following scenarios:

However, as no good deed goes unpunished, this comes at a high cost: 73ºC reached in 15-20 minutes of full load with Prime95. That's almost 16% more heat, and 3ºC above the CPU thermal margin. Obviously unmaintainable with air cooling.

I then tested these scenarios:

13
Is it better to use an offset or manually set CPU voltage (with respect to CPU longevitity)?

0
Windows 7 power management -- vCore goes from 0.9V to ~1.30V
13
Is it better to use an offset or manually set CPU voltage (with respect to CPU longevitity)?
0
How to get more BCLK from non-k Corei5 cpu Haswell
4
Undervolting with Intel' XTU - which offset should you reduce?
1
When is overclocking GPU unsafe?