What version of MS-DOS does Rufus use to make bootable USBs?

Rufus allows for the creation of a bootable MS-DOS flash drive. It does this out of the box as an option without needing to specify an image or ISO. 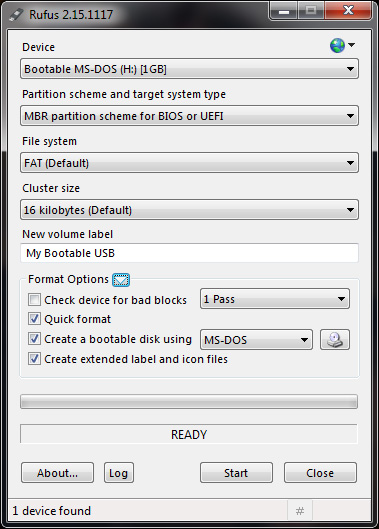 However, documentation on the tool is virtually non-existent as it is, and I can't find anything that specifies what version of DOS the program uses for this purpose. Does anyone know?

He extracts the version from the Windows file diskcopy.dll

looking at other comments in dos.c that are the DOS files from WinME (DOS 8.0), he does the same patching as shown here:

As correctly pointed by @magicandre1981 the version of MS-DOS provided by Rufus is the MS-DOS from Windows Millenium Edition, "uncrippled" to enable boot (I didn't invent this patch, but picked it up from the HP USB and other tools).

Also, and this is the important part, Rufus does NOT embed the MS-DOS files within the application, but picks them up from the Windows system it is running from, because, since the MS-DOS binaries are proprietary and copyrighted by Microsoft, it is illegal for anybody else but Microsoft to distribute MS-DOS binaries, be it in a zip file or an application (as a matter of fact, it appears that HP got into legal problems with Microsoft when they tried to produce a version of their HPUSBFW utility that embedded the Windows 98 MS-DOS files, and Microsoft quickly got them to stop doing that).

So, up to Windows 10, we relied on the fact that the MS-DOS files (from Windows ME) were included in the DLL (diskcopy.dll) that Windows uses to create DOS bootable floppy disks (which actually contains a complete bootable floppy FAT image), and picked the files from there, which we can legally do.

However, with the introduction of Windows 10, Microsoft dropped the ability to create bootable floppies (since nobody using Windows 10 is expected to boot from floppy) and removed diskcopy.dll. This means that we don't have a legal way to create MS-DOS bootable USB flash drives any more, and the end result is that:

In practice, I have yet to encounter a tangible report from someone indicating that FreeDOS does not work where MS-DOS does, which is why I don't consider the loss of MS-DOS support in Windows 10 a big loss. Plus, as opposed to using MS-DOS, which is closed source and which Microsoft has stopped supporting a long time ago, FreeDOS is Open Source and actively supported, so you're usually much better off using FreeDOS.

I decided to test it myself. I created a bootable USB running MS-DOS using Rufus and then booted into it on my laptop. Once in MS-DOS, I ran the ver command to determine its version, which returned Windows Millennium, aka Windows ME.

I'm guessing that this means the version of MS-DOS used by Rufus is pulled from Windows ME, rather than being one of the earlier, standalone versions. How this ME-integrated version differs from the earlier versions I'm not entirely sure.

Not the answer you're looking for? Browse other questions tagged bootable-media ms-dos rufus or ask your own question.

8
How do I create a bootable flash drive running MS-DOS 6.22?
2
Adding DOS 6.22 boot partition within Linux fails
0
How to give bootable MS-DOS 6.22 access to files?
0
How to get Win 9X OEMSetup working from same C:\ USB stick as the Boot Disk

39
Unable to Make Bootable USB Stick From ISO
0
UEFI bootable Pendrive of Kali Linux
1
How would I make a bootable USB, that runs a cmd-like environment, and all its commands?
0
Rufus rejecting HDDErase.iso
11
How to install DBAN (Darik's Boot and Nuke) on an USB flash drive larger than 4GB and make it bootable on an UEFI-equipped PC?
8
How do I create a bootable flash drive running MS-DOS 6.22?
2
How do I create a custom, bootable MS-DOS ISO image?
1
Clarification on using Rufus to create a bootable live FreeDOS USB drive
0
Why and how does Rufus use FAT32 for a bootable Linux ISO?
0
Does right-click Format option remove MBR from USB flash drive?