Over the course of a few months I purchased two of the same SSD from different stores (both 960GB SandDisk SSD PLUS, same firmware(Z33110RL) - just waited for them to be on sale) with the intention of combining them in RAID0.

When the second drive arrived, I benchmarked both to make sure everything was working. 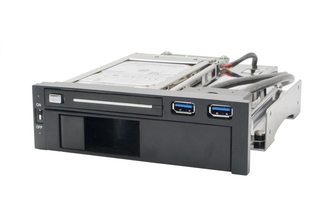 For convenience, I used a drivebay (like in the image above) on a SATA port configured for hot swapping in the BIOS to test the two drives using CrystalDiskMark. I used the same sata port, simply swapping one for the other.

I noticed that one of the drives (the one I had just purchased, and so had not used yet) was performing drastically worse than the other, despite being on the same motherboard(GA-Z97M-D3H), on the same SATA connection, and the same model(960GB SandDisk SSD PLUS) with the same firmware(Z33110RL).

I tried forcing Trim, reformatting again, copying some files to it, etc. but the results were consistent, and I tried swapping the drives back and forth several times; The results never changed, and the new drive was consistently about 1/4 of the speed of the other one on Sequential tests.

What would cause this behavior? What determines the selected 'Transfer Mode' for the drive?

The drives are -identical-, both formatted to NTFS, and are being tested on the exact same motherboard/port/etc.

I have used this hot-swap bay with dozens of drives before, and none have ever acted up like this.

Yep, had a similar problem, the answer turned out to be that the manufacturer had mislabeled the drive. It was a "Crucial" disk and they replaced it, after I convinced them that this was the problem. You might check that!

6
Hot swap in Ubuntu Server not working
8
Mixing SATA and SAS drives on same controller
1
Will connecting a SSD drive using USB 3.0 to SATA connector achieve the same speed if it is connected to internal SATA port?
6
Why SAS SSDs are better than SATA SSDs? Or...not really?
0
Two SATA 2TB drives in RAID-1 configuration; only one 6.0gb/s port open
32
Demystifying SATA hotplug
2
Why is mSATA so expensive