What is the network adapter configuration necessary for a client-style VMWare Player on a laptop?

While I've been able to get a Vmware player (12.5.7) Hortonworks 2.4 sandbox to work on my desktop under the NAT adapter without issue, I cannot get a separate Vmware player (same version) to work in a wireless environment on my laptop (Windows 10). The avenues I've gone down so far for the network settings on the guest vm (Centos flavor of Linux) have been NAT or NAT Networking. Both of these choices return the same results-- an error on the guest startup which reads: "device eth0 does not seem to be present", then: "Connectivity Issues Detected!" when the startup process has completed. No IP address is displayed. On the laptop eth0 is discovered and the ip address is assigned.

This is probably less of network/vm issue than it is an unfamiliarity issue. I haven't a clue how to bridge the dynamic wireless environment to ip addresses/ports. I'm not a network geek--just a data/Hadoop developer, so setting this up has turned out to be a frustrating stumbling block. Any advice?

For those developers, Hadoop explorers, etc. following behind me:

The heart of the issue on my laptop environment was due to the fact that only the adapter for VMNet 1 (host-only communication) was appearing on a device manager/network adapter lookup, but not the NAT adapter VMNet 8 for the physical network, so on guest startup, eth0 had no addresses to work with. After reading this post, and viewing this post, I decided to re-install VMWare Player.

After re-installing VMWare Player, I was able to see the VMware Virtual Ethernet Adapter for VMnet8 (screen shot). Once that appeared, Centros was able to assign addresses correctly. 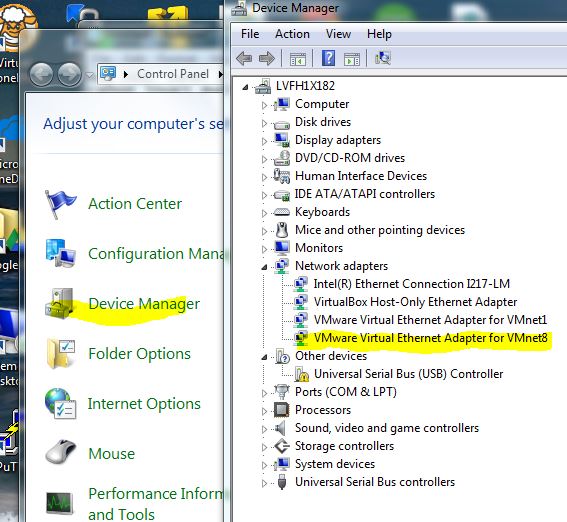 Not the answer you're looking for? Browse other questions tagged linux wireless-networking vmware sandbox or ask your own question.

0
What virtualization solution should I try next, after hitting problems w/ VMWare Player in dual-network setup?
4
Cannot connect to VMWare virtual machine through NAT
0
vmware is not able to ping windows laptop network
0
Configure network Linux on VMware (Nat or Bridged)
2
Unable to connect to internet in VMware player 7
0
Guest can only access Internet connection for certain websites in vmware player
0
network setting automatically switched to Bridged in VMWare Player
0
VMWare, Cannot ping Linux guest from Windows 10 host in a wireless network: How do I disable a NDIS 6 Filter Driver?