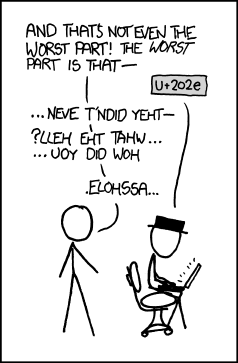 17
How can I delete U+200B (Zero-width space) using sed
28
How to type zero-width space character (U+200B) on a laptop keyboard?
5
How to put unicode in Cmd/Batch?
2
Fixing corrupted unicode text file after system crash
0
Word Find and Replace ZERO-WIDTH-SPACE (ZWSP, U+200B)
4
Variable-width non-breaking space in Word 2016 (including a possible solution)
2
Looking for a Unicode character: keyboard glyph for zero-width non-joiner
1
After setting EnableHexNumpad=1, hex Unicode alt-codes work well in Notepad++ and Excel but have a strange behavior in Word
1
Text editors; Unicode; the zero-width non-joiner character