TL;DR: Firefox won't show localStorage for a domain and I need to get some data from there.

I need to copy the value of a localStorage element, which is a really long string so just echoing on the console won't work, because it's truncated.
Both Safari and Chrome do echo the whole string to the console, but not Firefox, and I need to do this on Firefox because here is where that specific value is stored.

Firefox's storage tab used to show this value, now it won't, and it won't even show any of the other keys for this domain, so even short strings are not shown there either.

I could configure my local web server for https and then send it this value with an XMLHttpRequest, but I'm hoping for a simpler solution. Any ideas?

In the image here you can see how locaStorage does have values, but the storage tab won't show them, and that was the only way I could copy the long string. 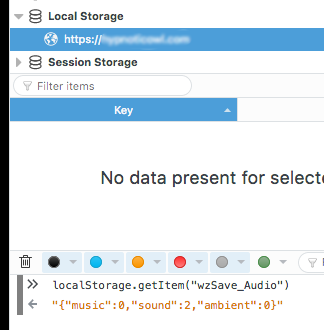 Firefox's console has a copy helper function that will copy its argument to your clipboard, with no truncation:

Not the answer you're looking for? Browse other questions tagged firefox local-storage or ask your own question.

2
Firefox, Thunderbird, Safari - hangs up on start
1
Firefox Sync on Firefox 4.0 Beta 6 won't sync passwords or history. Do I need to file a bug, or is there a way to fix it?
11
How to clear all HTML5 local storage from Safari?
4
Can I limit intensity of fsync's of webappstore(localstorage) sqlite db?
4
How to lock Firefox tab to domain or URL pattern
1
Rewrite browsing history and sessions after website changes domain
0
How to prevent deleting a FireFox Local Storage value?
1
No website is able to use localStorage in firefox, error "SQLite encountered an IO error"