I've noticed some leftover registry keys from Adobe Flash although I removed it months ago:

I tried to delete them but I didn't have the necessary permissions so I made sure regedit.exe was running with admin privileges but it still wasn't possible. So I did some research and found this tutorial to take ownership of registry keys but the deletion still didn't work! After that I used runassystem.exe to open regedit.exe as SYSTEM but again the same error! And after that I tried to give the full ownership as SYSTEM to my user account and all Administrators... same error!

Well, then I searched my whole C: drive and found two folders:

Both of them contain exactly the same files:

I tried to delete them as admin... didn't work! Not even with Lockhunter! 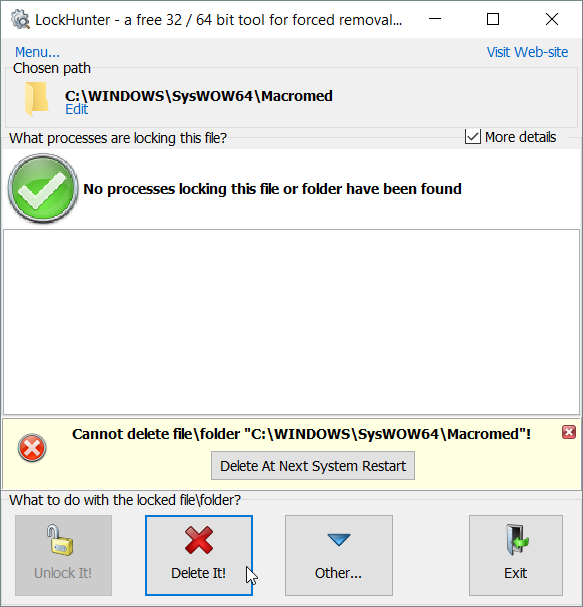 Lockhunter says there's no process blocking these folders so I tried to delete them but yet again... it didn't work! So I clicked "delete at next system restart" and rebooted. At log on it prompts that the deletion was successful but guess what? The folders are still there!

What the hell is this? In what world is such a behavior acceptable from a "legitimate" company? How to delete Flash completely?

See the SetACL command in action:: 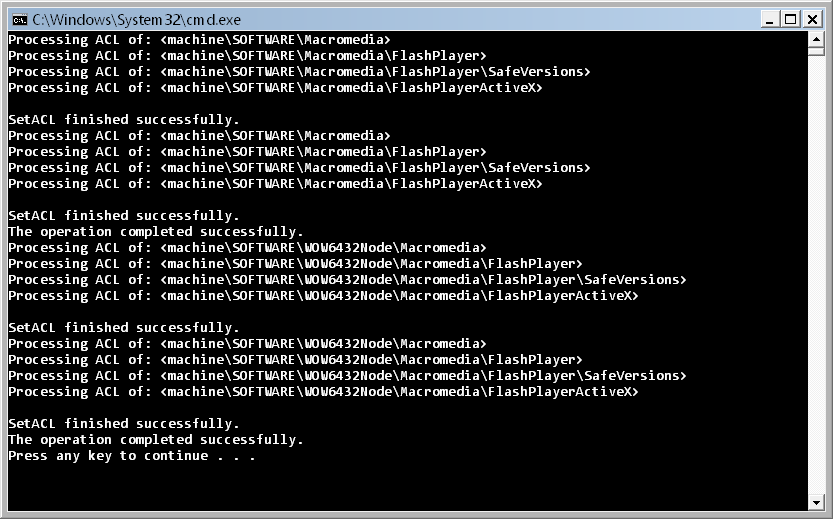 Edit:: You may run these commands from command prompt. To do so use %X instead of %%X. Also if you see any permission error, then change the Everyone user to Administrator or to your user name. Like in icacls command use as:: icacls %%X /grant John:F /T if John is your user account name.

It din't work for me with Win 10 LTSB. So I've used the registry editor from the free bootable iso KRD18 from kapersky (use rufus to make your bootable flashdrive), but before use it you have to shut down all stuff that can made win 10 to update, desactivate the update service, and then use "StopUpdates10", it is faster than delete "EOSNOTIFY.EXE, UsoClient.exe, MusNotification.exe, UpdateAssistant.exe, WINDOWS10UPGRADERAPP.EXE, remsh.exe, dismHost.exe, SIHClient.exe, InstallAgent.exe, Windows10Upgrade.exe, WaaSMedic.exe" with the file explorer of KRD18. If you don't do this Win 10 will "update" >>> in fact reinstall flashplayer.

Not the answer you're looking for? Browse other questions tagged windows permissions windows-registry malware flash or ask your own question.

0
Flash CS5 file not compiling (white screen and flash hangs)
2
Grant Admin rights to an entire registry Hive?
0
How to delete a registry key on reboot?
0
How do I wipe the Windows folder from another hard drive?
1
Deleting registry keys and folders with CMD using messages and pauses
3
How to fix “Deny Everyone” permissions in registry