Disable ignoring of hyphen for sorting in Windows 10 File Explorer

In the Windows 10 File Explorer, the hyphen (and apostrophe?) characters are ignored for the purposes of sorting file or directory/folder names. For example: 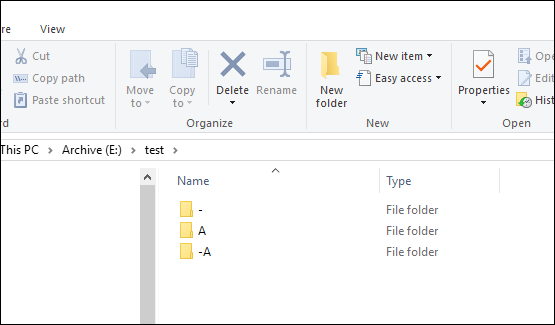 Does anybody know how to disable this behavior?

It is affected by neither the registry setting HKEY_LOCAL_MACHINE\SOFTWARE\Microsoft\Windows\​CurrentVersion\​Policies\​Explorer\​NoStrCmpLogical nor the equivalent Group Policy setting "Turn off numerical sorting in Windows Explorer".

Ignoring the hyphen/dash is a "feature" that was added to Windows Explorer at the same time as numerical sorting. However, unlike numerical sorting, this is not controlled by any registry entry, but is rather hard-coded into Explorer.

This cannot even be corrected by an extension, since Microsoft has sharply curtailed their use in Explorer since after Windows XP. Not even new Column Handlers are allowed. Only adding a custom property tab by using an extension is still supported.

The only solution is to use an alternative third-party product. The behavior of Windows Explorer itself cannot be modified.

See the article Best Free File Manager for a list and reviews of such products, ranked by usability features, and also Altap Salamander Freeware.

Not the answer you're looking for? Browse other questions tagged windows-10 windows-explorer sorting or ask your own question.

5
sort 'like a library' in windows explorer (omit 'The ', 'A ', 'An', etc)
6
Windows Explorer – why at-character @ sometimes is not allowed in filenames?
0
How to order photos in File Explorer by date and time actually taken
1
Sorting issue with Windows 10 File Explorer
5
Windows 10 Security Tab missing from file properties
1
How to undo group policy change to Windows Automatic Updates
0
How to setup Windows File Explorer to automatically open locations with custom "aliases" in the Address Bar (like "desktop" or "program files")?
0
Unable to disable numerical sorting in File Explorer