Play random movie/episode within a folder from its context menu

I have a relatively expansive media collection stored locally on my machine within two parent folders ("Movies" and "Shows"). My goal is to be able to play at random any one of the movies or episodes I have within these folders by right-clicking the parent folder and selecting a "Play random movie/episode" item from the extended context menu.

I have the following batch script stored in a folder on my Windows 7 machine, which I took from here and adapted to look for .mp4, .mkv and .avi files (all of the extensions that my media collection consists of):

The registry key seems to work well enough - the item shows up in the extended context menu for folders: 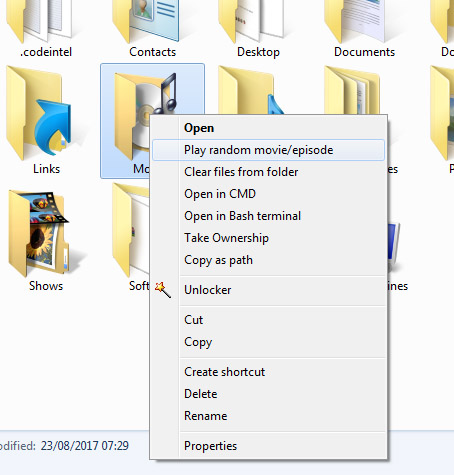 ...and when clicked, it runs the batch file. The problems lie in the execution of the script.

These problems persist in spite of the fact that the script uses dir *.mp4,*.mkv,*.avi /b /s /a-d %1 to enumerate the files, where %1 is the parameter for the target folder.

Why isn't the script working as expected? What have I missed here?

Point 1 from your conclusion :

Instead of selecting just the .mkv, .mp4 and .avi file formats, the script selects all file types.

Is clear from the command

This initiates 4 scans, 3 from current directory with the respective extensions and one for the passed %1 value

I suggest you first do a CD /D "%~1" to have the dir working from that location.

Not the answer you're looking for? Browse other questions tagged windows windows-explorer batch-file context-menu random-number-generator or ask your own question.

63
How to remove items from the right click (context) menu in Windows?
5
Windows 7 Context Menu for Folders - *IF* folder contains certain filetypes
12
How can I add an icon to my custom context menu item in Windows 7?
0
How can I have a custom 7Zip batch script work like the "add to archive..." context menu action of 7Zip?
0
How to run determine current directory as parameter and pass to script activated from context menu
5
Disable Google Drive context menu outside Google Drive folder
9
Can sub-folders be created on the Explorer context "send to" menu
0
remove Add to Windows Media Player List from folders
1
How to use a batch file on the context menu and 'pass on' the rightclicked file?