I got this output from ps aux|grep firefox command:

According to this blog, this error occurs after firefox crashes. However, every time I run Firefox again, that large line of arguments appears too.

I already try these things:

However, it did not work.

Is it possible to remove such a line of arguments?

Probably not removable, but that will appear only when browsing web pages.

What is that line of argument

When running Firefox 54 or newer release, the Multiprocess Firefox (a.k.a. Electrolysis or e10s) is now enabled by default for all users. The latter link has explanation for the matter on MozillaWiki.

So the line of argument -contentproc -childID 1 -isForBrowser [...] appears in process list because Firefox is running with multiprocess enabled by default.

The cryptic part of argument  ¼½¾ǃː̷̸։֊׃״؉؊٪۔܁܂܃܄ᅟᅠ᜵ [...] seems to correspond to the blacklisted characters by Mozilla, as per network.IDN.blacklist_chars documentation at MozillaZine, which was hinted by this partial answer by TT Farreo at Stack Overflow.

The blacklisted characters are also found in the configuration of Firefox itself, which can be accessed at about:config from the address bar. See the following screenshot as proof. 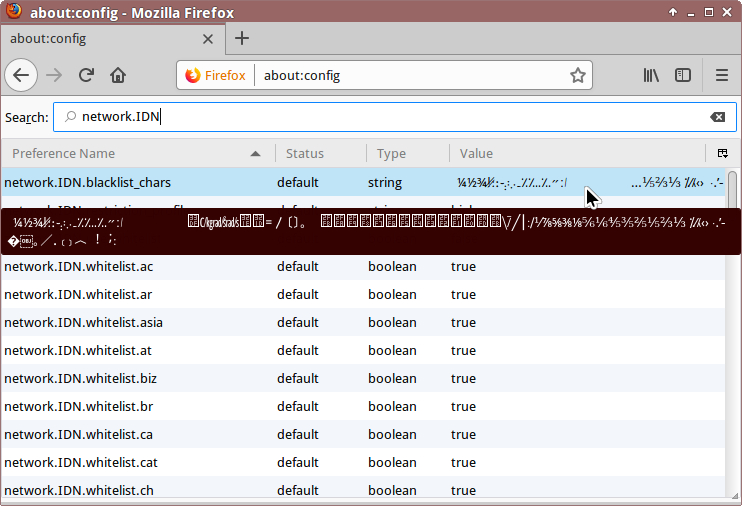 How to check multiprocess

If multiprocess is disabled in Firefox for known reason:

If multiprocess is enabled in Firefox:

The "Web Content Processes" may have different values based on the performance settings in Firefox. The value '0/1' is shown because in Preferences > General, under Performance section, "Content process limit" option has been set to '1'. If set to '4', then the value is '0/4'.

Whether shown or not

From my observation, I have identified the following cases:

Note that "when active" means a process with the line of argument -contentproc -childID 1 -isForBrowser ... will appear when Firefox is used for browsing web pages. The process will appear throughout the session.

Say if only 'about:' URL pages are opened in Firefox, then the process won't appear at all even multiprocess is enabled. See following screenshot as proof. 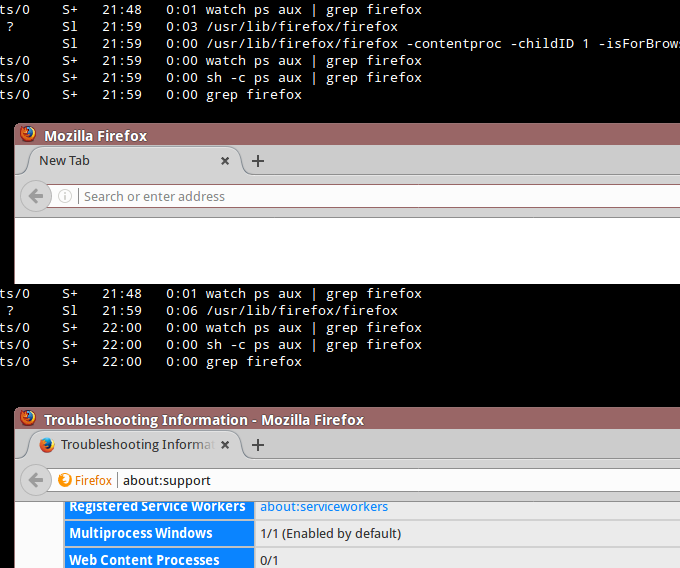 TL;DR: The process with line of argument is not rare, but is normal to see when running Firefox 54 or newer for all users. That is because multiprocess is now enabled by default.

Not the answer you're looking for? Browse other questions tagged linux ubuntu firefox or ask your own question.

4
What are all these strange firefox processes?

1
Mozilla build firefox 3.5.1 on Ubuntu issues with images going greyscale, and javascript not running
1
How to display DNS cache in Ubuntu 9.04 running Firefox?
3
Running different versions of Firefox
1
Running Firefox 8 and Firefox 5 simultaneously
11
“Firefox is already running” with -no-remote
1
Create new profile while Firefox is running?
1
Firefox opens directories with kdesvn
0
running a firefox tar.bz install in my homedir with separate settings from a distro installed firefox
7
Can I keep firefox running in the background?