In the past I have not had any issues with Windows Update. My system is Windows 7 Home x64 SP1.

I have Windows Update set to download important updates, but wait until I install them. The update was successfully downloaded.
Opened Windows Update and installed the update. Finished "Successful". Clicked on "Restart". Update got to 30% (as usual) and computer restarted. After restart, system loading looked OK, and the update proceeded to around 70%.
Then it displayed "Failure configuring Windows updates - Reverting changes".

After that and another restart, the systems booted OK and Windows Update history showed the update "Failed".

I would like to understand better how to troubleshoot these kinds of problems though.

When a monthly rollup update fails, is there any way to know which specific update caused it? And does the "revert" step remove all the updates, or just the failed ones?

And what log file(s) contain such information? I found "WindowsUpdate.log" but there did not seem to be any judgmental information, just activity information.

Same occurrence for the October and November monthly rollup updates (failed), but the Security only updates were successful.

For November, the Windows Update error: 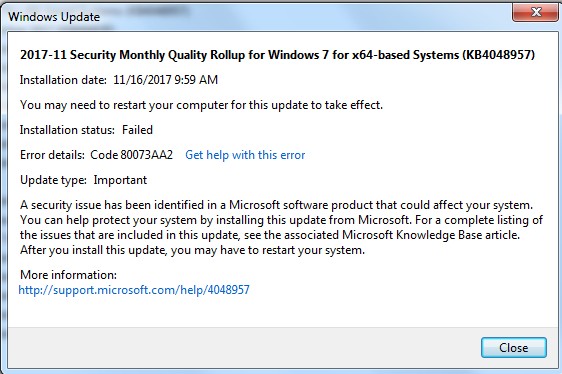 This time I localized the error in the cbs.log file.
You can see it in this file: cbs error log if you search for "80073aa2".
Seems to be related to WmiCmiPlugin, but I have no idea beyond that.

The error code 0x80073aa2 means ERROR_EVT_CONFIGURATION_ERROR. So there is an configuration issue regarding Windows Events.

Looking in your CBS.log shows that the configuration for Microsoft-Windows-RPCSS is damaged:

To fix this, run regedit.exe, go to HKEY_LOCAL_MACHINE\SOFTWARE\Microsoft\Windows\CurrentVersion‌​\WINEVT\Publishers\, press CTRL+F and search for Microsoft-Windows-RPCSS. Now you see the key HKEY_LOCAL_MACHINE\SOFTWARE\Microsoft\Windows\CurrentVersion‌​\WINEVT\Publishers\{‌​d8975f88-7ddb-4ed0-9‌​1bf-3adf48c48e0c} where the Microsoft-Windows-RPCSS events are stored.

So delete the key HKEY_LOCAL_MACHINE\SOFTWARE\Microsoft\Windows\CurrentVersion‌​\WINEVT\Publishers\{‌​d8975f88-7ddb-4ed0-9‌​1bf-3adf48c48e0c} and now Windows Update should install fine.

SOLUTION! THIS WORKED FOR ME!

Check the free space on your 'System Reserved Drive' (Drive Z: in my case). Mine was 99% full, so I increased the partition size from 50MB to 100MB using Minitool Partition Wizard (free).

I asumed the 'monthly quality rollup' updates might be trying to write to this drive during boot sequence, but because there was no space left it failed and done a roll-back. Since doing this, all my Windows Updates have worked fine now for past 3 months!

I had the same issue as many others report (on Windows 7) and for 6-8 months I read all these posts with no solution in sight.

Hope this helps somebody :)

Not the answer you're looking for? Browse other questions tagged windows-7 windows-update or ask your own question.

58
How do I hide the System Reserved partition?
1
Cannot Install Windows 7 SP1 (64-bit)
1
How to generate a cbs.log file in Windows 7?
1
Windows 7 Update Failed on Multiple attempts