How do I use Ctrl-Shift keyboard shortcuts for Tmux, with Cygwin/Mintty?

My previous setup was Cygwin + ConzoleZ, a Windows console with tabs and splits/panes. Unfortunately ConsoleZ still uses conhost.exe, the Windows console, with all its limitations. So I decided to use Mintty instead, which is a xterm-compatible console. However, Mintty doesn't have tabs or panes so I decided to use Tmux, since it can provide both.

However, due to console limitations, Tmux uses a command prefix which is the first "step" of any command. I've bound mine to Alt-a for convenience. So all the commands are Alt-a, let go of Alt-a, press something else. Not really ergonomic.

I've been checking the Mintty and Tmux documentation for anything that can help, but I'm probably still missing something.

So far I managed to bind Ctrl+Tab and Ctrl+Shift+Tab to rotate through tabs. I've also found that Mintty does emit some special escape sequences for the shortcuts I want to use (Ctrl+Shift+<...>). However, I don't know how to bind those to the commands I want.

I also saw that Tmux can have keyboard shortcuts without prefix, by using:

So in theory I'm really close.

The question is: how do I actually map the special escape sequences to commands? I think it should be doable using user-keys, just as in the example for Ctrl-Tab, but how can I list or otherwise see the Tmux escape sequence generated by Mintty for the keyboard shortcuts I want?

I am not using TMux, but I suspect you need to verify the Ctrl-Shift setting of Mintty 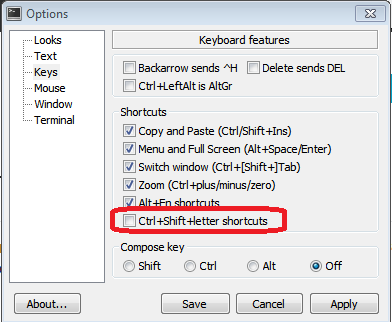 Not the answer you're looking for? Browse other questions tagged keyboard keyboard-shortcuts cygwin tmux mintty or ask your own question.

2
What are the .tmux.conf bindings for Ctrl-Shift keyboard shortcuts with Cygwin/Mintty?