Change font (italics) in Notepad++ to plain text by REPLACE

The title says it all: I working on a large Holy Bible project and have two large plain text files representing two different versions, and I'm using the COMPARE plugin to notice differences in the 'ole King James.

However, one version has the verse numbers in italics and the other doesn't - no big deal, except that COMPARE will put a warning triangle on each text line stating a difference, which is distracting from actual noteworthy differences (spelling, punctuation, etc, which really is my goal) and this is slowing me down.

The rub: I can't just rip REPLACE through, deleting all /italics/ as many of the words are italicized and must stay that way; thus I would like to change one of the versions from having italicized verse numbers to just plain number text, but just the numbers and not any words.

Additionally, if I could change both versions to have superscript verse numbers now, then that would be just fine too, and probably preferred.

There appears to be much info on changing font colors, etc, but little on using REPLACE for the actual 1-99 number set. Will someone please help me?

You can replace one format with another in just one operation using the replace dialog with the regular expression mode: 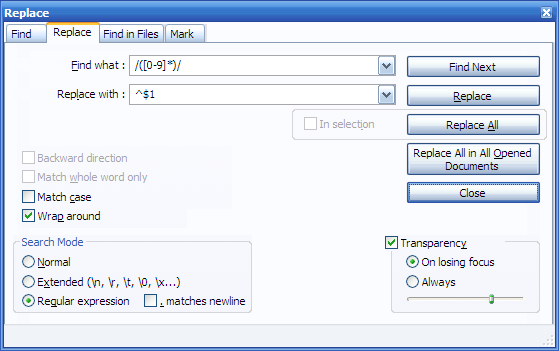 As a precaution you should make a backup since this will modify the whole file, if you only want to replace a part of the file select that part before opening the replace dialog and check In selection in addition of the other steps.

Not the answer you're looking for? Browse other questions tagged notepad++ fonts or ask your own question.