How do I move ellipses around in GIMP

So if I make a new layer, and make an ellipse on it using the ellipse tool, then color it, then switch to the MOVE tool, and try to move it, (with the ellipse layer active) it won't grab the layer of the ellipse, but rather the background. What am I doing wrong here? I find it almost impossible to draw an ellipse in exactly the right place because of the way it expands (unlike a rectangle). Please help.

By default, the behavior of the Move tool (as set in the Tool options) is Pick a layer or guide. In this mode it auto-select the layer to drag by finding the topmost non-transparent layer for the pixel you clicked on. So, it is a good habit to click where the layer you want to drag is not transparent (on your ellipse, instead of outside it). Once understood, this behavior is really the most intuitive, because you can reorganize several layers without having to explicitly select each layer before moving it. 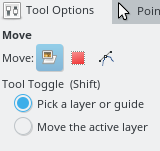 In order for the move tool to work, you have to click and drag on the filled in portion of the layer (the area where the ellipse is colored / filled in).

This also works if you have two or more layers linked together. Clicking and dragging on the filled portion of either linked layer will move both linked layers.

I usually deselect the ellipse before i move it. If the marquee is still around the object you wont move it. si right click deselect or hit esc.

Not the answer you're looking for? Browse other questions tagged gimp selection layers or ask your own question.

4
Select object in GIMP
0
GIMP: Pastes into a zone within a layer?
30
How to set a custom sized rectangle select area in gimp?
0
How to circle out something in a picture?
1
how do I re-edit text color in Gimp
2
Why does my floating selection disappear when I move it within a pasted layer?
0
Gimp: paste image (from clipboard) as new layer, and crop document to that layer's size?