What is the “scan and fix” prompt caused by, and what does it do?

When inserting a 128GB MyMemory.com USB 3.0 drive into my Windows machine, I get the following prompt: 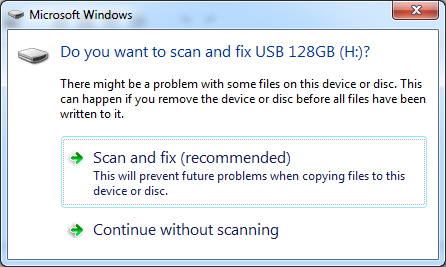 I want to know the technical details of what exactly on the drive's file system causes this issue, and what exactly "Scan and Fix" does. Is there any MS documentation on this?

I'm apprehensive of letting it run because the USB usually functions as data storage for a DroidBox and has data transferred to it from a MacBook Air, and I don't want any Windows changes to the file system affecting its ability to do either.

I understand that the most common cause of this on Windows 7 is ejecting the drive without clicking "Safely Remove". Write-caching is disabled for the device, as is the default for USBs on Windows 7, but I'm not sure how Macs and DroidBoxes handle this - at a guess, I'd say the person that the USB belongs to probably doesn't do the equivalent of "safely remove" when ejecting it, so could it be as simple as this?

I believe I've found enough to answer the second part of the question with some confidence, but I am also aware it's not so much scientific as it is speculation-chasing and glorified guesswork, and I'm not an expert by any means, so I welcome anyone that can smell bullshit in any part of it to point it out or to respond with their own, more informed answer to the question.

What "Scan and Fix" does

Although I could find no documentation on the feature at all, the following HTG article does fleetingly mention:

When you click on the prompt to do so Windows launches the CHDSK application in the background and scans the disk.

Knowing this put me at ease enough to continue with the prompt's "Scan and Fix" option, and surely enough, it took me to the following window: 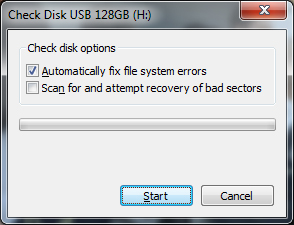 This is Windows 7's standard GUI for chkdsk, usually accessed from Disk Cleanup. Running it with the first option checked would correspond to chkdsk /f, and the second to chkdsk /r. So now we know the answer to "what does Scan and Fix do?" is "run chdksk".

From here, the next logical question for my case would be what exactly chkdsk does - specifically, whether any part of its inner workings could potentially compromise my flash drive's ability to run on MacOS or DroidBox/Android operating systems.

Thankfully, I wouldn't be the first to ask the question on here1, and there is some documentation out there on this. Unfortunately, it's still sparse, and anything I could find covered only NTFS drives, whereas my USB's file system is FAT32 - still, as a technical overview of what chkdsk does, it's helpful enough, and in my opinion, not likely to differ that drastically between the two file systems in core functionality.

Based on the above relatively comprehensive MS article, and based on my understanding of file systems, I can't see that there's anything that chkdsk would do that could render it a problem to MacOS or Android.

In addition, I came across this Lifehacker article, which suggests that MacOS, at least, does not disable write caching by default. The article's from 2011, but slightly more recent sources I've come across suggest the same, and there's nothing else to suggest otherwise, so it's likely this is still the case.

Finally, I understand from Ramhound's link and comments regarding the "dirty bit" - although I'm admittedly still a little confused about the concept and what palpable role it plays in file systems, even after attempting to read the Wikipedia page - that chkdsk is Windows' primary solution for fixing one, in which case it would make a lot of sense that this is part of what "Scan and Fix" does.

Attempting to neatly wrap these disparate pieces of information together into a comprehensible package, I'm left with the likely possibility that the owner of the USB failed to safely remove it on MacOS at some point, which somehow resulted in a dirty bit, a problem usually fixed in Windows using chkdsk, which is the tool "Scan and Fix" is a stand-in for - therefore, Windows prompted me to run "Scan and Fix" when it mounted and detected a dirty bit in my USB drive.

Based on all of the above information, I'm going to go ahead and run "Scan and Fix" on the drive when prompted. It seems highly unlikely that it would cause significant problems to the file system or any data loss (although I did come across some anomalous, scary examples of that, admittedly). I may update with results of the chkdsk scan if it shows anything out of the ordinary, but I'm guessing I won't need to.

(1) I include this link for the sake of its question only, because none of the answers go into sufficient detail about the technical aspects

Not the answer you're looking for? Browse other questions tagged windows-7 usb filesystems or ask your own question.

24
What does chkdsk do, exactly?

5
Why doesn’t windows explorer show my removable / USB drive even though the command prompt does?
2
What are the main differences between the Western Digital “My Passport,” “My Passport Essential,” and “My Passport Studio” external hard drives?
4
How to obtain the “eject” / “remove safely” for USB on Windows 8?
1
Files opened by some applications do not affect usb Safe Removal