TL;DR: do backup software replicate the EFS encryption on destination?

to: I:\BackupDocuments\ (on a 1 TB external USB hard drive, NTFS)

Certain subfolders (but not all of them) of D:\Documents\ are EFS-encrypted (easy to do and nearly transaprent encryption available in Windows 7).

Problem: only ~ 1 every 10 encrypted subfolders are encrypted in the destination (visible in green in the Windows Explorer).

Also, let's say the D:\Documents\Test\ fully-encrypted folder contains 500 files. Then only a few (randomly chosen among the 500!) files are encrypted in the destination I:\BackupDocuments\Test. That's really strange.

Note: I also tried with another backuping software (SyncBack), and it seems to be the same problem.

Question: Is that a general problem when backuping a drive containing certain encrypted folders, that the encryption is not always replicated on destination (sometimes true, sometimes false, randomly)?

This seems to be the solution, at least in SyncBack (no solution found with xxcopy yet): 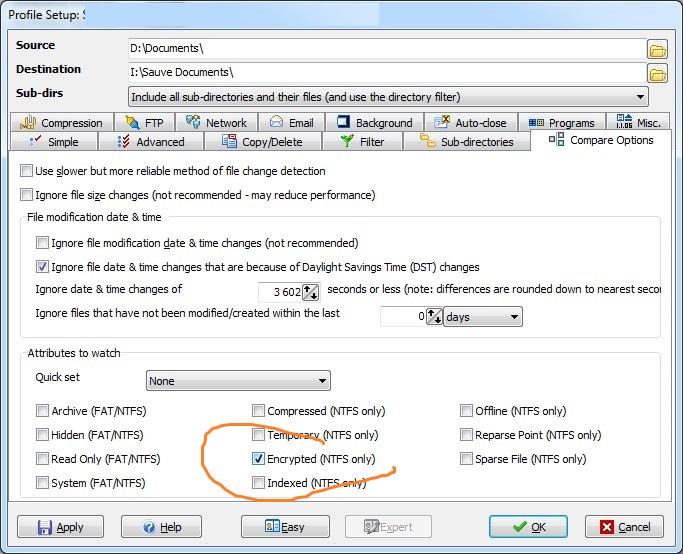 Not the answer you're looking for? Browse other questions tagged windows-7 backup encryption ntfs xxcopy or ask your own question.

1
How to disable backups in Windows 7?
3
Vulnerability of EFS (Encrypting File System) on Windows 7
5
Looking for command line encryption utility for Windows
2
EFS not available on Windows 7 Home Premium: workarounds?
3
How can I back up EFS encrypted files with Windows FileHistory?