I just updated Windows 10 to Fall Creators Update and since then I have 'unwanted' behavior.

If I leave open Chrome or any application when shutting down the PC, next time I boot up the system Windows will open the same Chrome tab/page and application automatically. So it looks like there is an option somewhere to remember last open task and open then on startup?

Does anyone know where to find this option or where to disable this feature?

By now, there are dedicated settings allowing you to control this behavior.

Go to Settings > Account > Sign-in options and scroll down to the bottom. There will be two settings:

I recommend turning both off, despite only the first seemingly dealing with this feature. I still noticed some apps opening after a restart if I did not turn off both options. 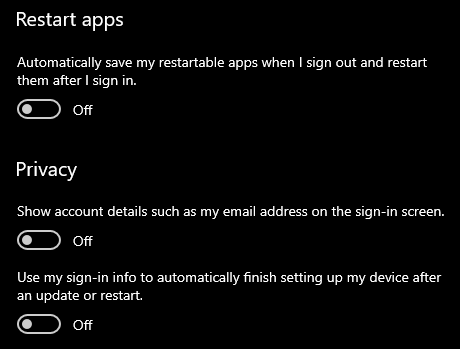 The following, old answer workarounds this by using a script to shutdown:

Here's a silly workaround for the similarly silly new feature.

Some background first: Windows seems to shutdown as if %WINDIR%\system32\shutdown.exe was invoked with the /sg /hybrid /t 0 parameters. The magic is in the /sg parameter which tells it to "restart any registered applications" on the next boot. The "old" /s parameter still exists and shutdown can be invoked with it manually.

The important shortcut properties are the following: 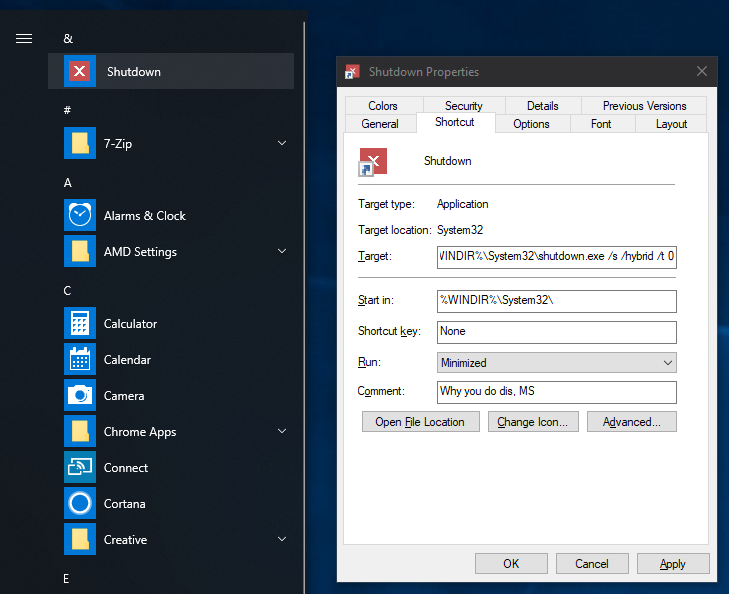 If you want a shortcut doing the same for restarting, the old /r switch can be used which was replaced by the new /g switch.

As mentioned in the comments, this is the intended behavior recently added to Windows. A thread on the Microsoft Windows community forum about the issue can be found here.

According to the thread there is currently no way to disable the "feature". The way to start without any apps reopening is (quote from a Microsoft Support Engineer):

If you want to start with no apps open (other than those set to auto-start via Task Manager/Start), you'll need to ensure all apps are closed before shutting down or restarting the PC.

However, according to this link, it should be possible to turn on and off.

To activate this feature, go to Settings > Accounts > Sign-in > (under Privacy) “Use my sign info to automatically finish setting up”.

You can try turning it off this option.