What are pros and cons of OneNote “update”?

I have the full commercial version of OneNote 2010. It is nagging me to update, but I'm not quite sure what it will update to.

I understand there are free versions of OneNote now that have reduced functionality. How do I ensure I don't lose features with an "update"?

I understand there are free versions of OneNote now that have reduced functionality. How do I ensure I don't lose features with an "update"?

I have read some complaints that the "free" version does not allow local storage of files. 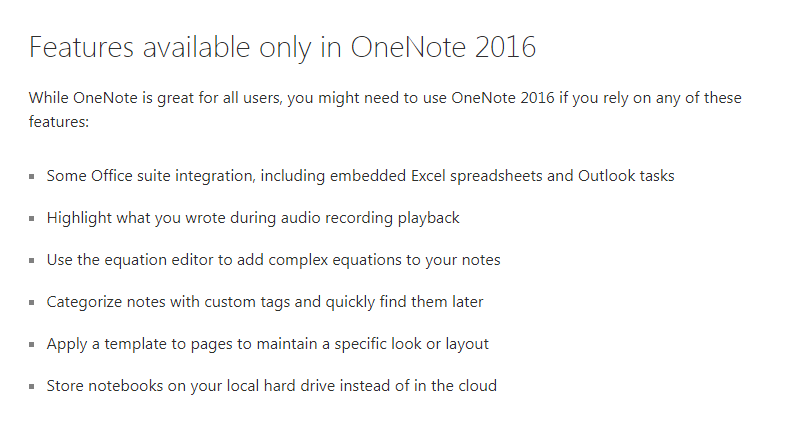 OneNote for Windows 10 and OneNote 2016 are both free.

OneNote 2016 (commonly referred to as the “desktop app”) comes with Microsoft Office and runs on Windows 10, Windows 8, and Windows 7. This version looks similar to the other Office 2016 apps like Word, Excel, and PowerPoint. The OneNote 2016 desktop app is also available as a free download from www.onenote.com

Source: What's the difference between OneNote and OneNote 2016?

Not the answer you're looking for? Browse other questions tagged microsoft-onenote-2010 or ask your own question.

0
OneNote and GroupWise
1
Onenote 2010 tell it what a word says
1
How can I close the navigation and page bars in OneNote 2010?
8
OneNote - export all sections in a notebook to Word? Or other method for same result
2
How can I use date and time selectors in OneNote 2010?
0
How can I prevent a container with bullet points overflowing a lower container in Onenote 2010?
1
OneNote won't remember which lists are collapsed
1
OneNote online and Android Equations