How exactly does the Google Wi-Fi mesh system work?

I've heard of network extenders where the unit has one radio - and the device shares time for its single radio between being associated to the main Wi-Fi router / access point and handling the Wi-Fi signal for the extended range. AFAIK, these tend to slow down the network for clients in the extended range because the single radio's airtime is split between the main network and the extended network.

Knowing these options, does anyone know how exactly does Google Wi-Fi work? Does it use the single radio or the dual radio design above?

In the Google Wi-Fi setup, you have a main device where you plug in power and also the cable to your modem, but all the secondary devices only require a power plug. The only thing is that on Google Wi-Fi, clients can associate on both the 2.4 GHz and 5 GHz bands.

How does Google Wi-Fi communicate between the different "hockey puck" devices on its backhaul? I've tried Googling this info, but no luck.

Looking at the Google WiFi router it supports AC1200 standards. There is a mix of different technologies, each using the bands and frequency (channels) differently. The MIMO standard provides faster speed over the 2 different bands:

"Multiple-Input Multiple-Output (MIMO) is a wireless technology that uses multiple transmitters and receivers to transfer more data at the same time. All wireless products with 802.11n support MIMO. The technology helps allow 802.11n to reach higher speeds than products without 802.11n."

However the AC XYZ standard, where the XYZ refers to the maximum theoretical speed. You have something similar is referring to number of bands: 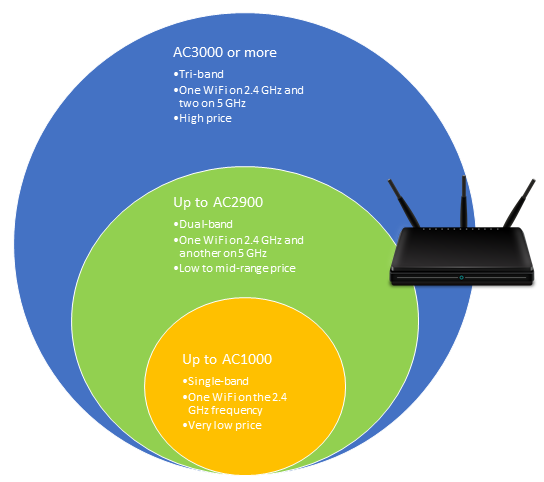 In terms of the additional pucks, they act as Wifi extenders.

Dual band repeaters get around this by connecting to the router on one band and outputting a WiFi signal on the other. The Netgear Nighthawk AC1900 Dual Band WiFi extender uses FastLane technology to improve performance using both WiFi bands. A fast processor also really helps (the Nighthawk has a Dual core 1GHz processor) by enabling maximum WiFi throughput.

One final feature that helps reduce speed loss is dual radios. If the device has dual radios, it can speak to the main router on lower channels, and then rebroadcast on higher channels. The Hawking Dual Radio Smart Repeater (HW2R1) uses two Wi-Fi radios. One Wi-Fi radio receives the signal and the other radio rebroadcasts the boosted signal. This clever design allows the boosted signal to utilize a different WiFi channel, which greatly increases performance compared to single radio repeaters. The Smart Repeater Pro also has a very powerful high gain antenna that can pick up even very weak WiFi signals, and it rebroadcasts that signal on two powerful 3dBi omni-directional antennas."

So based on the Google spec, they have at least the Dual radios but if you are concern, I would go with a router and extender that is at least AC3900 or higher

Not the answer you're looking for?Browse other questions tagged wireless-networking wireless-access-point or ask your own question.

0
Need some clarification about the 802.11n standard
3
Please explain the ideal dual-band wireless router setup for my scenario
0
Dedicated bridge or second router?
1
What is the maximum connections practically supported by a 2.4 GHz router?
1
Dual-band wifi router to dual-band extender: can/should I use a single SSID name?
0
Max bandwidth of wireless access point with gigabit backhaul
5
How to use multiple Raspberry Pi for creating single network (mesh) of access points
2
Two-storey house, dissimilar Access Points, SSID same or not?