In an attempt to recover as much data as possible off of a failing 3TB HDD, I proceeded like this :

But unfortunately, I didn't get the whole MFT : some of it (as I later found out examining the complete nfi.exe listing of that partition I had made earlier) is located around the 200GB mark, and a third chunk is located at the very end of the partition, close to the 3TB mark. I didn't think that the HDD's state would deteriorate so quickly during the recovery attempt (now it's got more than 12000 reallocated sectors plus 9000 pending sectors, just a few hours later !...), and I didn't take the precaution to save the MFT from WinHex when I could. Now, with ddrescue it has become painfully slow, I probably won't get the whole MFT. Also, if I open that partial image with WinHex, it uses the same volume snapshot that was created when I examined the physical device, the files I want are listed with their correct size and dates, if I click on them it displays the correct first sector, but it still can't extract them (only 0 byte files are extracted), apparently the volume snapshot doesn't contain all the required data regarding the allocated sectors, WinHex seems to rely on the MFT at that point, so that won't work either.

But I have recovered a good portion of the chunks of data containing those six files, and I have for each of them a detailed list of the sectors / clusters they occupy (obtained with three different tools : nfi.exe, Recuva, HD Sentinel). Now, how can I rebuild those files with that information, using an automated script ? (It would be an impossible task to do this manually.)

With ddrescue I could use the -i (input position) -o (output position) and -s (input size) switches, but how could I automate the process, and run those thousands of commands all at once ?

On Windows, I know a command line tool called dsfo which can extract data from any source to a destination file with a command like this :

I could edit my list of sectors/clusters with a combination of Calc and TEDNotepad, to create a list of dsfo commands, but it would create thousands of chunks, which I would then have to join somehow. Is there a better way to do this in one step ?

So I took the list of clusters / sectors for one of these files, generated by HD Sentinel, which is presented like this :

I imported that into TED Notepad, and used the “Tools” > “Lines” > “Columns, numbers” function, selected columns 2, 3, 1 with tabs as separators, which produced this output :

So, what is the simplest way to run this huge series of commands on a Knoppix live system ? What is in Linux the equivalent of a batch script for the command prompt in Windows ?

(I could find that particular file on a P2P network, so it will allow me to test if this method works flawlessly, and if it does, to assess the level of damage. No such luck for the five others. One of those is not fragmented so I could extract it as one chunk of data : there are many blank sectors near the end, but the rest is readable. So there remain four files to extract that way.)

So I did run those ddrescue scripts (first made them executable with the “chmod +x” command, then called them with ./name_of_the_script) :

– At first the commands didn't work, ddrescue gave only errors, I had to edit the scripts again so that the parameters would be placed before the names of the input and output files. The commands then looked like this :

– Then the first attempt produced an unreadable file, without a correct MP4 header. Why ? Because the list provided by Hard Disk Sentinel gives the physical/absolute sector numbers, but the logical cluster numbers (I verified by opening the image file with WinHex), so I had to add 264192x512 to the input offset calculation (the partition offset being 264192 sectors, or 129MB).

– Then it worked. It took just a few minutes and produced five video files, which are mostly readable, skippable to the end, with their expected content — I haven't watched them completely, but it seems as flawless as can be. 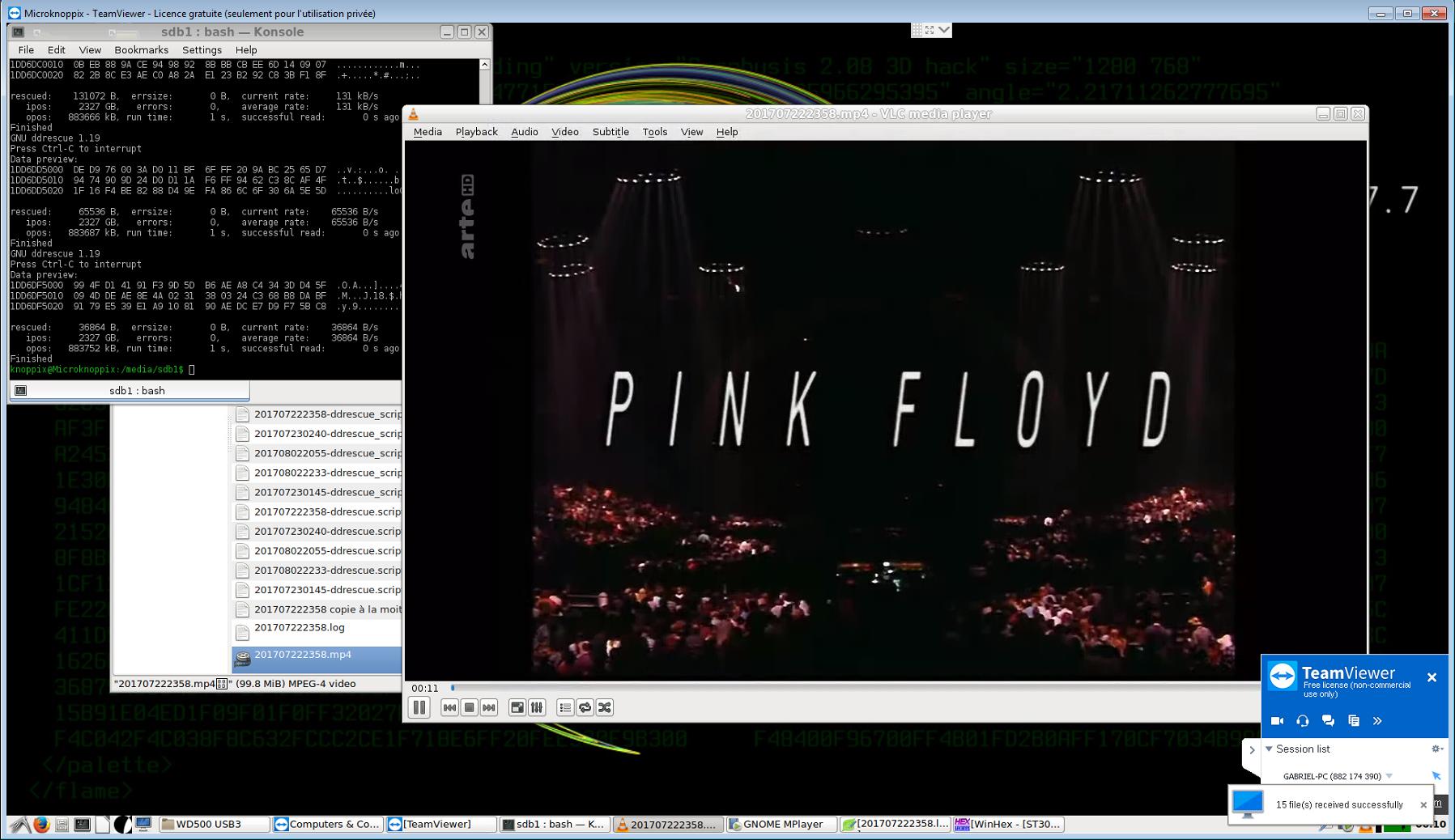 (I made all this on a secondary computer running on Knoppix live from a memory card, and used TeamViewer to command it from my primary computer on Windows 7, and also to be able to transfer the script files easily. Maybe there's a simpler setup for such purposes, but, well, it works ! :^p)

– But of course there are corrupted parts, since there were unreadable sectors in that partial image. How could I know where, quickly and reliably ? Well...
I had the idea to use ddrescue's “generate” mode, which creates logfiles (or mapfiles as they're called now) by parsing the output and considering that totally empty sectors are unread sectors, marked “?”, the rest being marked “+”. Since ddrescue expects an input file and an output file, but only the output file is actually parsed in that mode, I created dummy input files with this command, which copies only 1MB but extends the size to the size of the output files (just to save time and space) :

Then I ran the “generate” command :

And then I opened those files with ddrescueview : 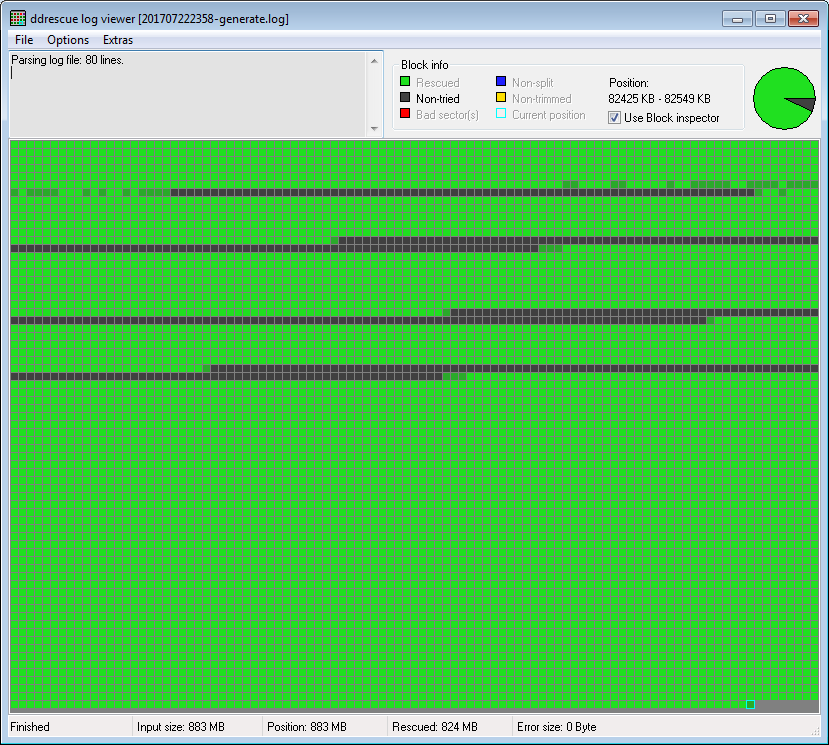 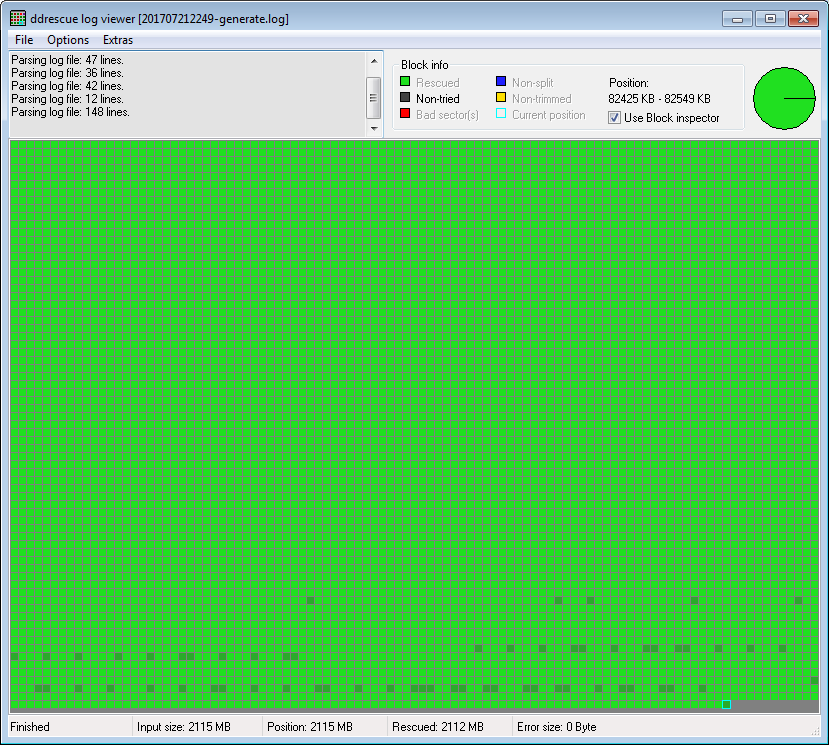 (Three of the six files are seriously damaged like the first one above, with large chunks of empty data, the three others only have a few corrupted sectors like the second one. The second one is the one which was not fragmented, I extracted it with a single ddrescue command.)

And then I patted myself on the back with one hand, while I was slapping my face with the other for having used that 3TB HDD every day for months with no backup... (At first it was supposed to store only temporary stuff, while I would be making room on other HDDs, but it took longer than anticipated, and I ran out of space to store such videos, and even my personal pictures and videos at some point, it could have been a major disaster, but “it's only a glitch”, as Dick Jones would have said.)

Not the answer you're looking for? Browse other questions tagged linux command-line data-recovery ntfs mft or ask your own question.

4
quick way to find large stretches of zeros in files
4
How do I find if there are files at a specific bad sector?
5
NTFS partition no longer accessible, 3 MFT records corrupted, way to fix them?
1
What does it mean to “Repair the MFT”
1
Extract X bytes at Y offset of input files and add it to the end of one output file, in a loop
1
piped FOR command, only the first output gets copied repeatedly
1
Rescuing files from a dead HDD: is a full ddrescue image still the “least damaging” option on a big drive if the needed files are small and few?
0
Get a list of files located on a range of potentially bad sectors in NTFS

2
Is it possible to find corrupt files spanning across bad sectors of a hard drive or find files fragmented beyond part of a partially copied partition?
0
Recover files that are still there
15
How to unmark an NTFS cluster as bad?
0
Where on the disk is the NTFS reserved area?
2
Thousands of bad clusters discovered by chkdsk on external HDD
8
Get list of files affected by bad sectors
0
Get a list of files located on a range of potentially bad sectors in NTFS
5
NTFS partition no longer accessible, 3 MFT records corrupted, way to fix them?
1
Maxiumum recovery of data from old floppy discs with padded bad sectors and multiple passes