Can I save these documents on a dying machine from oblivion?

First, a confession: no, I didn't do the backups I should have.

I was working on a file and tried to save it when I was told I was trying to save to a read-only filesystem. Turns out my filesystem is read-only now and there are i/o errors all over the place.

I was able to save some of the files by emailing them to myself through an open web browser, but that crashed and I'm unable to relaunch it. But I still have files of interest open in an editor. I can't seem to save the files anywhere, but I can copy their contents. If only I could find a way to exfiltrate the file contents, I could save myself months of work.

But there are some horrible limitations. I attempted to insert a USB drive, but no device appears to represent it, and the mount command dies with a segfault. I can attempt to ssh to another computer, but I get "bus error" and it dies. ping, dmesg, ifconfig, none of these work. But I do have vim and less and ls and can spawn new bash instances.

No lynx, no firefox, no google-chrome. There's no DVD drive.

Basically it seems my SSD has died. Or maybe the whole motherboard. I have documents of great value still in memory, I have an IP address and network connection, I can run a few random commands and have 3500 more on the path that I could try.

cat and gcc seem to work. I can write to files in /tmp. I have a running ipython instance that still seems to work.

So... what I've tried so far has failed. But I feel like there are still a thousand possibilities. What am I not considering? How could I possibly get these files off of my dying computer?

There must be a way.

Thanks for everyone's suggestions thus far---I know this isn't even a well-defined question since you guys don't know in advance which programs/files can be read or not. Still open to better suggestions than this video approach! 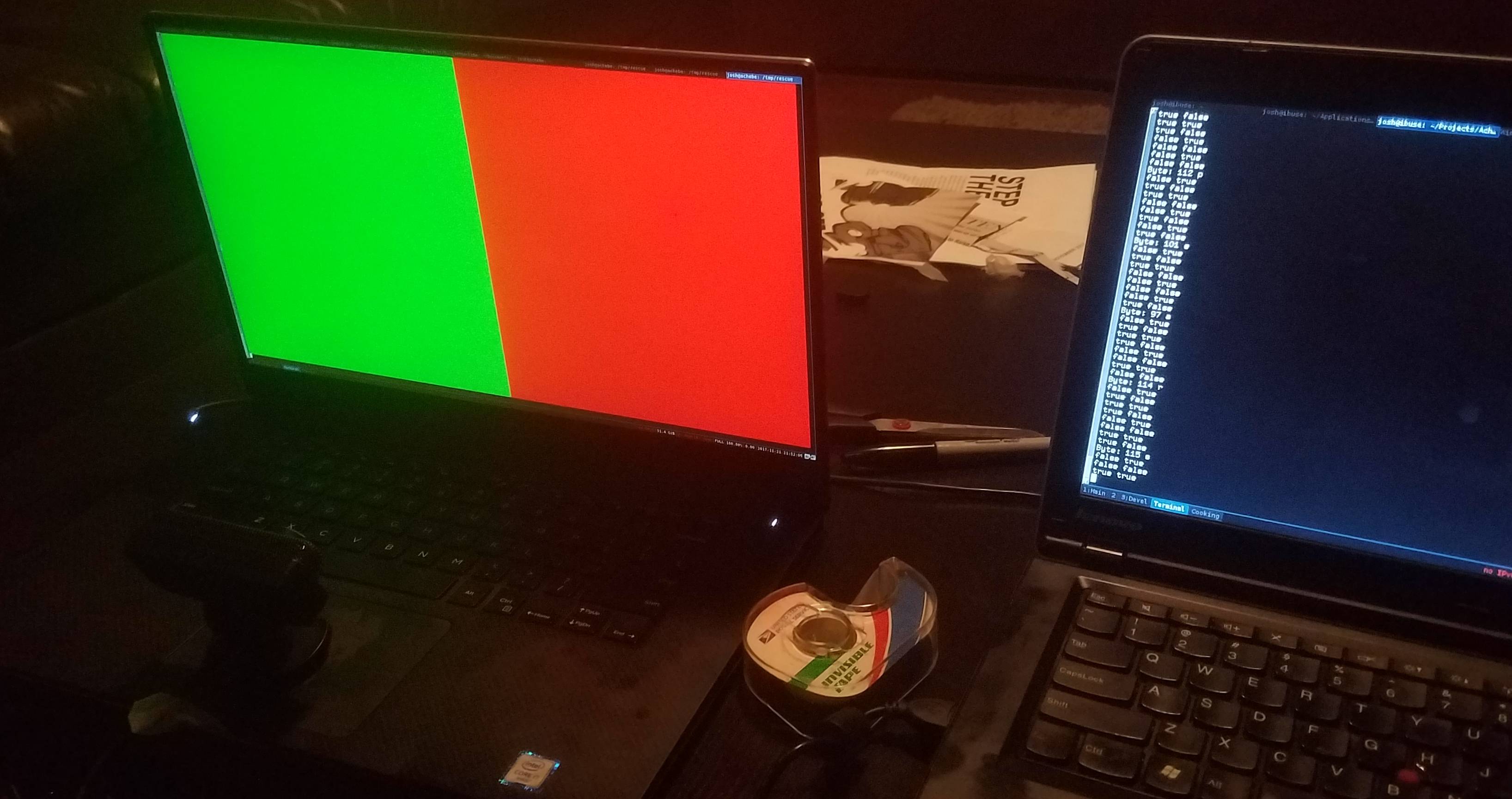 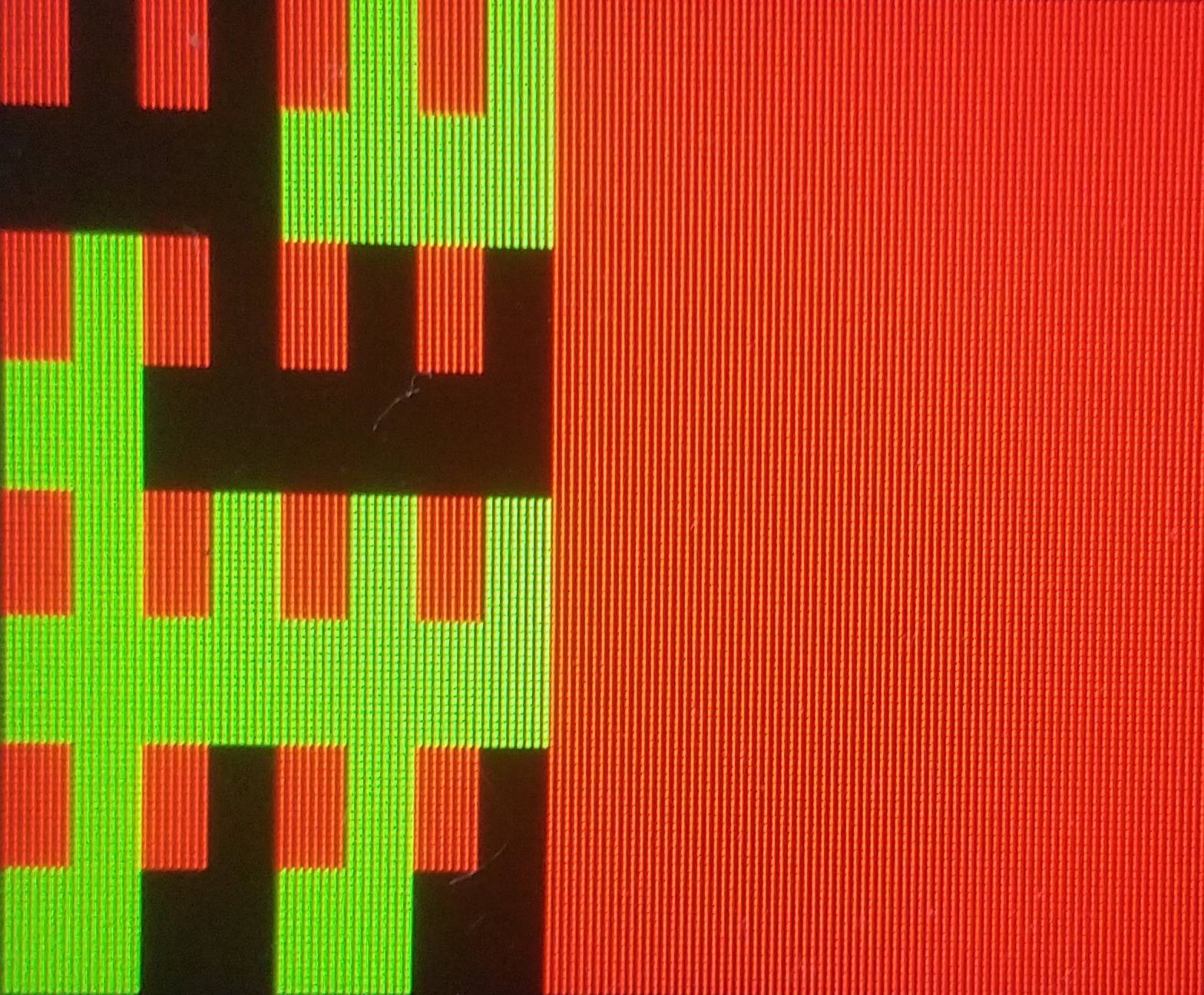 The right half is still a clock signal, flashing on and off to mark the arrival of new frames. But the left is now a grid where each cell is marked by a red square in the corner, and then the green cell to the right and down from the red square is flashed on and off to indicate a bit. The red squares should let the receiving computer calibrate where the cells are located. I haven't got any data across this way yet, but it's what I'm working on.

User Francesco Noferi has done some great work helping me utilize the ALSA library mentioned in the previous update. The C compiler had a problem, but using the Rust compiler I was able to use the FFI to call directly into libasound. I've now played a bunch of my data over audio and it sounds like music to my ears! Still need to get a real communication channel established, but I'm feeling very hopeful. At this point my job is basically to implement a modem, so if anybody has any guidance on good ways to do that I'm all ears. Ideally modulation that's easy to implement by hand and demodulation for which there's an existing library I can use. Since this can go directly over an audio cable and not through the phone network, theoretically we can do much better than 56kbps or whatever the standard was back in the day, but in practice who knows what we'll get.

Thanks to everybody following along here and at /r/techsupportmacgyver and at /r/rust contributing so many excellent suggestions. Going to get this "modem" implemented soon and then I'll finish this up with an epilogue. I think I might put my code up somewhere for other desperate folks to make use of in the future---maybe even a repository of weird exfiltration tools that are easy to type into a dying machine by hand? We'll see what happens.

UPDATE 5: It took me a long time wrestling with ALSA and my cheap StarTech USB audio capture device (no builtin line in on the receiving laptop), and many false starts trying to roll my own transmission protocol, but finally under the advice of some Ham radio enthusiast friends of mine I implemented the RTTY line protocol running at 150 baud, which in practice gives me maybe about 10 bytes per second. It's not super fast but it's fairly reliable. And I'm very nearly done transferring my 820KB file, verified using CRC32 checksums (using the crc32 functionality from Python's zlib module, which I have access to). So I'm declaring victory, and want to give my thanks once again! I'll spend some more time finding further files that are readable and which I can transfer, but the foundation is in place. It's been fun working with you all!

On the dying machine:

On the rescue machine:

here's an example libasound program with just enough definitions to get basic 2-channel 44.1k wav output going without the headers.

EDIT: I'm actually not sure if straight up dumping the data as wav would work, as noise when recording could easily damage it, but you can probably do something like a sine wave of bits at high frequency which is more reliable

EDIT2: if aplay is present and works you can also use that and just write a program that output raw audio and pipe it into aplay or anything that can play audio

EDIT3: modified it to not use any headers at all

Is your HDMI or any other display out port working? If so you can use a screen capture device to record it as video and process later. Thus not being limited by your webcam's framerate.

How about you hex-encode your data and output it page per page to the terminal?

You can add a prefix with the the offset in the binary so that you can easily regenerate a page (for manual correction?)

Then on a different computer use some OCR software to scan the pages.

80x25 terminal would yield 1000 bytes per page (minus some space for the prefix). So in roughly 1000 pages you could get out your data. Even at one page per second, that's less than 20 minutes.

Hex encoding is easy to write and also provides a raw form of error correction (there are only 16 valid symbols).

can you set up a network connection? ssh might be a bit too much but if you can use netcat on 2 machines you might be able to transfer data. one in sending mode, one in listening mode. If all you need to do is transfer text then this 'could' be a solution..

edit: nevermind, just read that you lost your network connection as well..

You may be able to email yourself from the commandline, including sending files.

You could remove the SSD from your machine and dd/photorec/etc it on another working machine.

Here's the Dell service manual for the 9550 - see the section for "Removing the solid-state drive". Once you remove the drive, you can get an external M.2 USB enclosure and attach the disk to another machine to recover your data.

Long shot, but some distros have ham radio protocols built in. One common one is fldigi. Try which fldigi.

If you have this or another, they convert text into audio, typically using some variation of phase-shift keying. The output goes to your speakers/headphones, and is received by a stable computer in the same room, listing on its microphone. (This eliminates the ham radios which transmit and received the audio over the airwaves).

The QR codes approach could be good. You could fit as many as you can on the screen, and refresh them as soon as your terminal allows you. Then record the XPS' screen with a camera (as opposed to using a webcam), and just work on deciphering the video you've got saved. Might be helpful to use slow motion capture even.

Great show :) I have 1 suggestion: you can also read data from screen using a photo diode connected to the sound card of the other computer

Not the answer you're looking for? Browse other questions tagged linux bash ssd fedora crash or ask your own question.

9
Is it safe to disconnect a SATA disk during sleep?
5
MP4 corrupted, how to repair?

4
Getting an ALSA program (ChucK) to work with Pulseaudio?
1
RAID0 SSD performance degredation
3
Very high IOWait after connecting SSD drive
4
How to use synchronous endpoint of USB audio device?
2
Error in the test before installing Fedora to Mac (next to OSX)
1
Slow rsync Transfer Speed over Wi-Fi on OpenWRT
0
How to recover data from dying hard drive that constantly disconnects on linux