Running the devcon.exe properly (enabling/disabling the device from command line in Windows 10)

I have a device in my PC which runs on Windows 10, Enterprise version: 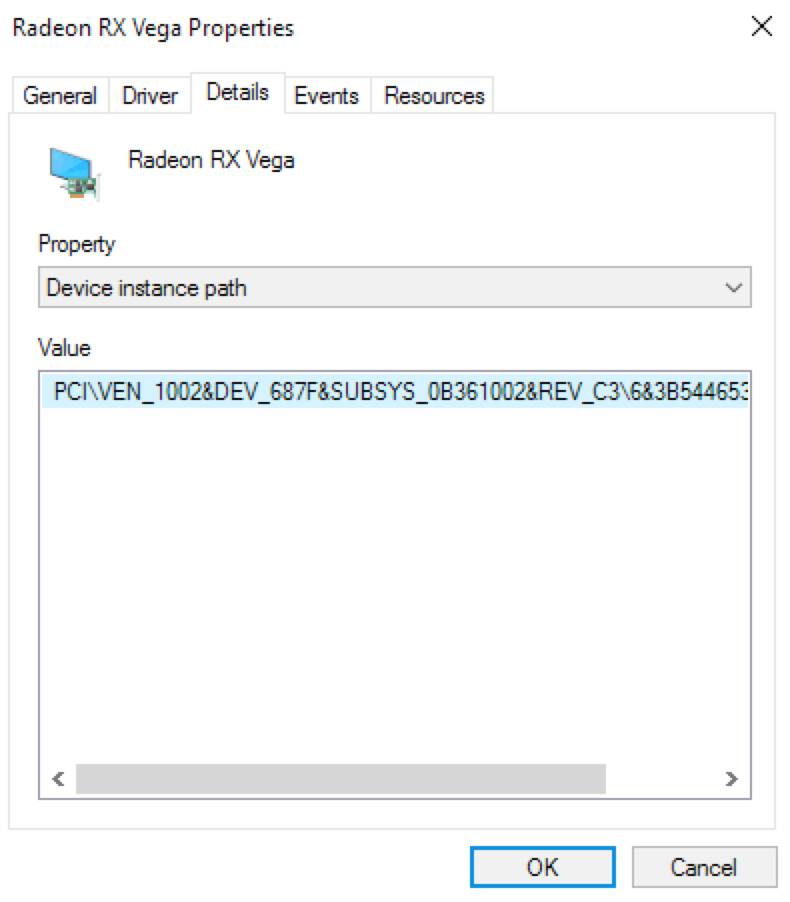 I would like to disable and re-enable this particular device (and possible all others of the same prefix) every time Windows restart, preferably completely without my (or anyone else's) interaction.

In order to achieve this, I am trying to write a simple batch script of 2 lines and putting script's shortcut to folder opened with pressing WIN+R and typing shell:startup. The content of the script is:

However, running this (from command line, in folder where devcon.exe is located) as a regular user which is actually "an Administrator" doesn't produce any errors in the command prompt, but it also doesn't disable the card - it doesn't look like disabled in Device Manager and the card is still visible and usable in some other programs/tools.
After "re-enabling" (which obviously re-enables nothing) the card simply doesn't show the same performance like it does when I do all this manually, by mouse-clicking in Device Manager.

I tried various combinations of running this as "an Administrator" because by many other suggestions I am suppose to run "it" like this (just to mention that I am very new in the Windows environment). I tried to run cmd as an admin, devcon as an admin, run both things in the same time as an admin, tried to run my script as a task in Task Scheduler with "Run with highest privileges" checked, using runas and finally, enabling the built-in Administrator account, rebooting the machine, logging in as an Administrator user and trying to run both commands individually, each time welcomed by the following error:

The screenshot provided should prove that device is there and that path which I'm trying to use in devcon.exe is correct.

Am I using devcon.exe incorrectly? If not, can someone explain me what could be the reason of my error and how to possibly get rid of it?

I thought your issue could be related to an incompatibility with Windows 10 Enterprise, as I've had some issues at work with it. However, it's most likely due to using the wrong version of devcon.exe I would confirm you're using devcon.exe from the x64 folder.

Not the answer you're looking for? Browse other questions tagged windows windows-10 bash administrator device-manager or ask your own question.

18
How to restart a video card driver in Windows 7?
1
Shortcut to enable/disable a device in Windows

3
devcon disable fails on win7 for usb camera. why?
2
Enabling or disabling NIC remotely with windows 2008
4
Does Disabling a PCI Device in Windows Device Manager Shut Off Power?
4
Is it possible to toggle disabled/enabled devices from Command Line, simlar to Device Manager?
0
Passing variables with space to the command line as admin
10
Enable/Disable device driver via command line
0
How to change (via command-line) setting for “use device” / “don't use device” on Windows 10?
1
Find the com port of a specific device on command prompt
0
What is the difference between plugging in USB device and Enabling it in Windows
0
devcon.exe cannot disable usb device