I have two Dell computers running Windows 10 with COM ports on the motherboard (not a USB to serial converter). The COM ports worked on both until, on separate days, after a reboot, they both showed up in Device Manager like this:

If you open the entries in Device Manager, the Device Status is:

If I uninstall and re-install the driver, Windows just reports that the most-up-to-date driver is already installed. The event log shows the Device Manager events as follows: 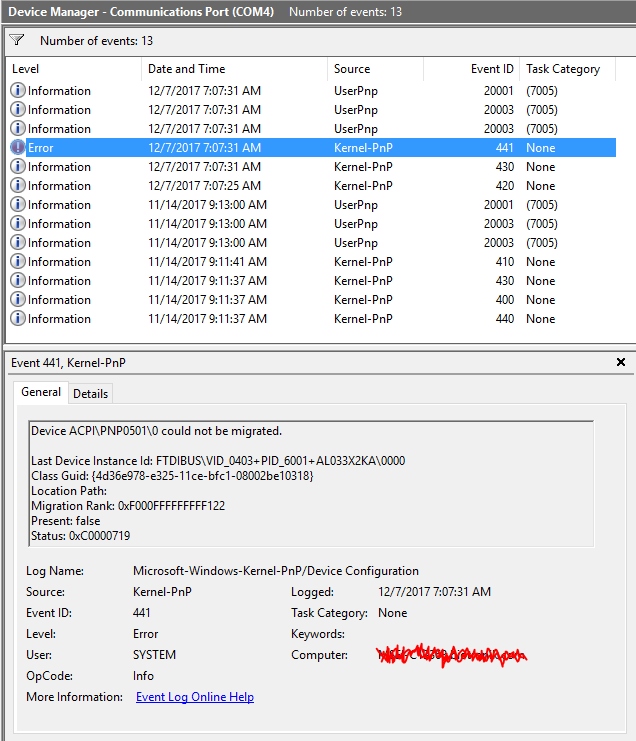 The event names corresponding to those entries (from top to bottom) are:

The entries dated for November must have been the initial install (someone else did this).

In the registry, Computer\HKEY_LOCAL_MACHINE\SYSTEM\ControlSet001\Services\Serial has the following entries:

Computer\HKEY_LOCAL_MACHINE\SYSTEM\CurrentControlSet\Services\Serial has the same entries.

I also looked at this registry key on the machine where the COM ports had always worked--it did not have a UpperFilters entry.

I'd love to see another answer that explains why this is necessary, the purpose of the UpperFilters entry, and how it gets corrupted.

Not the answer you're looking for? Browse other questions tagged windows-10 windows-registry com or ask your own question.

7
What do LowerFilters and UpperFilters CD/DVD driver registry settings do?
8
How do I find the device which has Com Port X reserved - want to reclaim the port num for different device
0
how to set MTU value in windows xp
4
Enabling AHCI in BIOS for SSD
5
Cannot remove entry in HKLM\SYSTEM\ControlSet001\Services\bam\State\UserSettings\<key>
0
Code 39 for all LSP & COM ports in device manager