I have been using Windows 10's Windows Subsystem for Linux bash (Ubuntu via Microsoft Store) in the last few weeks, no problem, awesome feature, couldn't be happier.

But today it suddenly stopped working. Typing bash just does nothing on the command line (cmd and PowerShell), as if it would be waiting for something. It doesn't crash or output an error message, but just keeps showing a blinking cursor. 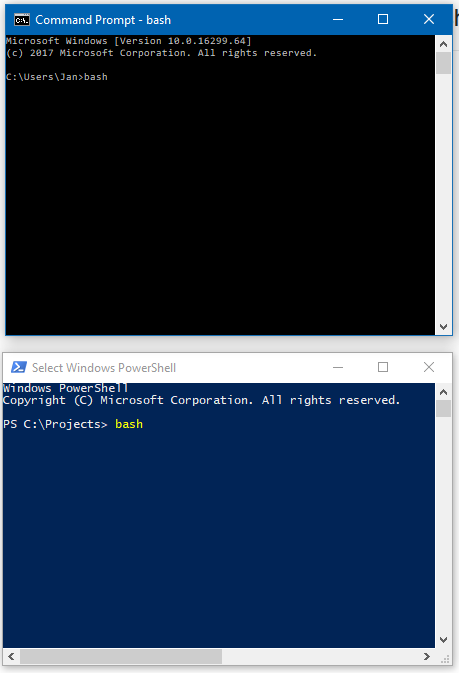 (Cursor not visible on screenshot, it is a blinking _ on the next line after bash)

Any idea how to debug and fix this?

Update: After a few manual restarts and one "crash" (I think explorer.exe stopped, and didn't really come back after killing the process after a prompt) it now works again for now.
I had the problem a few weeks before (where I fixed it be reinstalling WSL), so I assume it will reappear sooner or later.

Try to do a full reboot of Windows10, hold Shift, and click “Restart.”

Normal reboot/shutdown action in the start menu will not shutdown Windows 10 fully, for the “fast boot” mechanism saves memory from the last session. The other answer mentioned changing system settings which make Windows 10 doing a full reboot, it works, but unnecessary.

By holding the Shift key and click the “Restart” in the start menu, Windows 10 will go into advanced restart mode, choose “Shutdown” from the menu. Then start normally again.

As discussed on https://github.com/Microsoft/WSL/issues/849 by user imkimchi the steps for solving this issue are:

Not the answer you're looking for? Browse other questions tagged windows-10 bash windows-subsystem-for-linux windows-10-v1709 or ask your own question.

11
WSL Ubuntu bash: The operation timed out because a response was not received from the virtual machine or container
4
WSL doesn't want to launch

16
Windows 10 WSL (bash) and mintty
0
How to access Linux files in WSL (windows 10 fall creators update)?
0
How to remotely terminate bash shell processes but ensure history is saved?
1
Windows 10 completely non-functional, even after fresh install. Could it be hardware-related?
2
can't start docker via wsl powershell command but can start it in Ubuntu
4
WSL doesn't want to launch
0
Slow bash under WSL