What is wrong with my speed at 4K? Why is it so slow? Or is it supposed to be like that? 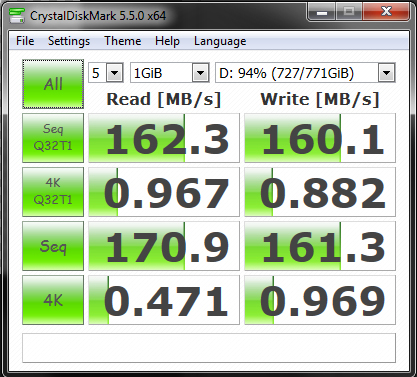 Is that speed okay? Why do I have such low speed at 4K?

What you are running into is typical of mechanical HDDs, and one of the major benefits of SSDs: HDDs have terrible random access performance.

In CrystalDiskMark, "Seq" means sequential access while "4K" means random access (in chunks of 4kB at a time, because single bytes would be far too slow and unrealistic1).

Random access means there's no obvious pattern to the reads or writes. This doesn't have to mean truly random; it really means "not sequential". For example, if you're starting lots of programs at once they'll need to read lots of files scattered around your drive.

I've mentioned blocks a couple of times. Because computers deal with such large sizes (1 MB ~= 1000000 B), even sequential access is inefficient if you have to ask the drive for each individual byte - there's too much chatter. In practice, the operating system requests blocks of data from the disk at a time.

A block is just a range of bytes; for example, block #1 might be bytes #1-#512, block #2 might be bytes #513-#1024, etc. These blocks are either 512 Bytes or 4096 Bytes big, depending on the drive. But even after dealing with blocks rather than individual bytes, sequential block access is faster than random block access.

Oh, I mentioned seeking to something. Mechanical HDDs have a very slow seek time because of how they're physically laid out: they consist of a number of heavy metalised disks spinning around, with physical arms moving back and forth to read the disk. Here is a video of an open HDD where you can see the spinning disks and moving arms. 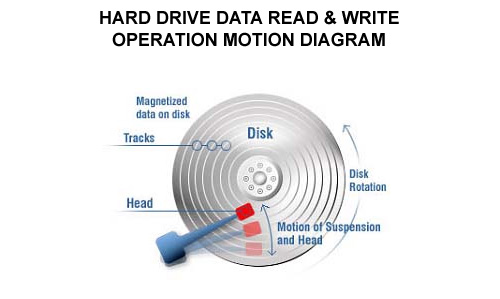 This means that at any one time, only the bit of data under the head at the end of the arm can be read. The drive needs to wait for two things: it needs to wait for the arm to move to the right ring ("track") of the disk, and also needs to wait for the disk to spin around so the needed data is under the reading head. This is known as seeking2. Both the spinning and the moving arms take physical time to move, and they can't be sped up by much without risking damage.

This typically takes a very very long time, far longer than the actual reading. We're talking >5ms just to get to where the requested byte lives, while the actual reading of the byte averages out to about 0.00000625ms per sequential byte read (or 0.003125ms per 512 B block).

Fortunately, we have a solution now: SSDs.

A SSD, a solid state drive, is, as its name implies, solid state. That means it has no moving parts. More, the way a SSD is laid out means there is (effectively3) no need to look up the location of a byte; it already knows. That's why a SSD has much less of a performance gap between sequential and random access.

There still is a gap, but that can be largely attributed to not being able to predict what comes next and preloading that data before it's asked for.

2 Technically, seek only refers to the arm travel. The waiting for the data to rotate under the head is rotational latency on top of the seek time.

3 Technically, they do have lookup tables and remap for other reasons, e.g. wear levelling, but these are completely negligible compared to a HDD...

As already pointed out by other answers, "4K" almost certainly refers to random access in blocks of size 4 KiB.

Every time a hard disk (not a SSD) is asked to read or write data, there are two significant delays involved:

Both of these are of a relatively constant amount of time for any given drive. Seek latency is a function of how fast the head can be moved and how far it needs to be moved, and rotational latency is a function of how fast the platter is spinning. What's more, they haven't changed much over the last few decades. Manufacturers actually used to use average seek times e.g. in advertisements; they pretty much stopped doing that when there was little or no development in the area. No manufacturer, especially in a high-competition environment, wants their products to look no better than those of their competitors.

A typical desktop hard disk spins at 7200 rpm, whereas a typical laptop drive might spin at around 5000 rpm. This means that each second, it goes through a total of 120 revolutions (desktop drive) or about 83 revolutions (laptop drive). Since on average the disk will need to spin half a revolution before the desired sector passes under the head, this means that we can expect the disk to be able to service approximately twice that many I/O requests per second, assuming that

Writes are typically slower when there is a cache flush involved. Normally operating systems and hard disks try to reorder random writes to turn random I/O into sequential I/O where possible, to improve performance. If there is an explicit cache flush or write barrier, this optimization is eliminated for the purpose of ensuring that the state of the data in persistent storage is consistent with what software expects. Basically the same reasoning applies during reading when there is no disk cache involved, either because none exists (uncommon today on desktop-style systems) or because the software deliberately bypasses it (which is often done when measuring I/O performance). Both of those reduce the maximum potential IOPS performance to that of the more pessimistic case, or 120 IOPS for a 7200 rpm drive.

Which just so happen to match your numbers almost exactly. Random I/O with small block sizes is an absolute performance killer for rotational hard disks, which is also why it's a relevant metric.

4K refers to random I/O. This means the disk is being asked to access small blocks (4 KB in size) at random points within the test file. This is a weakness of hard drives; the ability to access data across different regions of the disk is limited by the speed at which the disk is rotating and how quickly the read-write heads can move. Sequential I/O, where consecutive blocks are being accessed, are much easier because the drive can simply read or write the blocks as the disk is spinning.

A solid-state drive (SSD) has no such problem with random I/O as all it needs to do is look up where the data is stored in the underlying memory (typically NAND flash, can be 3D XPoint or even DRAM) and read or write the data at the appropriate location. SSDs are entirely electronic and do not need to wait on a rotating disk or a moving read-write head to access data, which makes them much faster than hard drives in this regard. It is for this reason that upgrading to an SSD dramatically increases system performance.

Side note: sequential I/O performance on an SSD is often much higher than on a hard drive as well. A typical SSD has several NAND chips connected in parallel to the flash memory controller, and can access them simultaneously. By spreading data across these chips, a drive layout akin to RAID 0 is achieved, which greatly increases performance. (Note that many newer drives, especially cheaper ones, use a type of NAND called TLC NAND which tends to be slow when writing data. Drives with TLC NAND often use a small buffer of faster NAND to provide higher performance for smaller write operations but can slow down dramatically once that buffer is full.)

Not the answer you're looking for? Browse other questions tagged hard-drive hardware-failure storage speed benchmarking or ask your own question.

1
Hard drive speed is slow only when booting from it

2
Very Slow DSL (ethernet) speed [New Interesting Update]
3
Why is a failing hard disk slow?
1
HDD Working very slow
0
How would a broadband supplier "increase" the speed of slow internet?
23
How to limit HDD write speed for chosen programs
3
Horribly slow write speed of HDD
1
Why does write speed constantly slow down in 7zip during compression?
0
Why does a WD HDD have 12 mb/s random write speed, 24 times as fast as its random read speed?