How do I delete a file that Windows says doesn't exist?

This is a very similar problem to this QA ( How can I delete a file that "Does not exist" ), except I'm on an entirely Windows computer, whereas the OP in that question was SSHing to a NAS running Linux.

I was using git with GitKraken and was performing a merge that I later aborted. During the merge I was diffing two files from two commits in the same branch and git (or GitKraken - I'm not sure who was responsible for the file, exactly) created two files on-disk representing a merge-conflicted file, each file represents the file's state from each commit.

When I was done, I tried to delete the files (it failed to clean-up after itself) - one of the two files was deleted successfully, but the other file cannot be deleted. 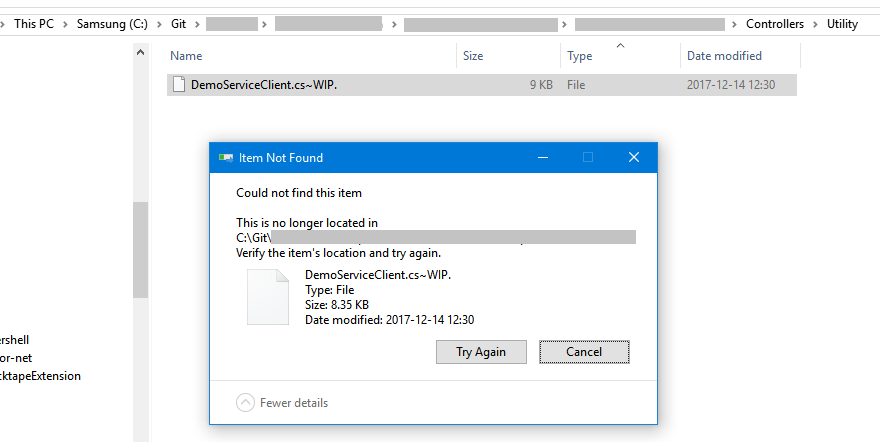 I had the same problem and found a solution here.

Edit: You will HAVE to move/rename the file into a folder you can delete with the provided solution (or check if you can already delete the file's parent folder, if possible).

Edit2: NTFS (or Windows itself) does not like/allow for file names to end with a dot or a space. You need to remove the dot/space from the file/folder name. You may need to to it from a DOS prompt (CMD), but then you may also be able to just delete it from CMD.

Here goes Rayza73's answer for reference.
I tried pretty much all he did, and also tried renaming the folder a few times.

I had this same problem using Server 2012 Std. I tried various options of taking ownership of the parent folder because the Security properties of the folder I was trying to delete were blank, using CMD and Dir /x etc. I even tried sharing the parent folder and then using Server 2008 R2. None of them worked. When I tried Dir /x Server 2012 doesn't show the 8 character filename with the ~1. I tried typing it in myself, but that didn't work either. I then found that there was a space at the end of the folder name. I then tried all the CMD options again using a space, still no luck. Then I finally stumbled upon this solution:

Open CMD and then type:

note the space after folder2 as per the space in the folder name.
Obviously D: is the drive that has the folder on it.

In my case there was no space or dot in the end of the folder name, just a stubborn folder left on a failed Teracopy run. But my folder had several folders inside it that could not be deleted.

This did the trick.

If it is a file instead of a folder, just adjust the command. The command rd stands for "remove dir", so it makes no sense to use it in a file:

You could also try to move it somewhere else before deleting it, if you are having problems.

Tip: You can use TAB to autocomplete the Files and Folder names in cmd. Repeating TAB will give you the next choice.

After failing all normal, Command Prompt, and PowerShell options, I got the problem solved by a small trick.

Understand this is an old thread, however while trying to find a solution to this exact same error I've read a number (more than id like) of threads now of which was a total wild goose chase.

I was unable to do what other threads suggested: Unable to delete, move, rename or archive for deleting (file appeared via dir commands however). If this fits the bill for you then the following thread provided a working solution in my case and has similar feedback.

I just encountered this issue after having extracted files, which placed a "b." file on my desktop - this may also work if your file ends in a space.

The suggested "solutions" above have not worked in my Windows 10 machine (1909). Credit to Micha on the below thread - Wasn't what I was looking for due to "windows 7" being in the title, however did work in my case.

How to delete a file ending in a dot in Windows 7?

Launch Command prompt as admin and modify the below to your needs.

My case was identical; A file name that contained a dot in the end : "John notes of February." (Windows 7) The steps recommended here didn't help. The "dir" command returned the same thing; the file name with the dot in the end. I opened the Command Prompt (cmd). I switched to the Desktop folder (chdir). I checked that no other file started with thw word "John" (dir). I entered the command : DEL John* And the problem was solved. I restarted Windows to confirm that the problem didn't occur again. However, we are talking about Windows 7. I can't be sure that the file won't come back by itself in the future. Warning: if there is any other file that starts with the word used (John), it is going to be deleted as well, and it won't go the the Recycle Bin.

Anonymous1Anonymous1
1
Add a comment  |
Highly active question. Earn 10 reputation (not counting the association bonus) in order to answer this question. The reputation requirement helps protect this question from spam and non-answer activity.

45
How to delete a file ending in a dot in Windows 7?
26
Cannot Delete Item "Could Not Find This Item" issue
5
How can I delete a file that "Does not exist"
2
Removing a folder from File Explorer that no longer exists on the file system

29
How to delete files and folders that cannot be deleted?
1
WinXP cannot access FAT/FAT32 Drives
0
Windows Backup error: 0x81000019 - Check VSS and SPP event logs
3
Thousands of bad clusters discovered by chkdsk on external HDD
3
NTFS compression ate all disk space with no possibility to recover
5
Maximum size of file that can be stored entirely in NTFS Master File Table (MFT)
2
How to determine the actual size on disk for a folder in Windows
1
Chkdsk Stage 3 Error but "Chkdsk /f" Fails to Execute Repair at Windows Restart