I recently bought a new desktop that came with Windows 7 Pro. After upgrading to Windows 10 and installing an SSD by partitioning the hard drive and making an image of the most important part, I have been using it for a few weeks with no trouble.

However, I just installed a GPU, and there were initially some troubles as I installed it, including the Blue Screen Of Death. After checking the Stop Code and finding instructions on this website to fix it by performing a check on the drive, I was able to make it work again, but since then the lower right corner of my screen has looked like 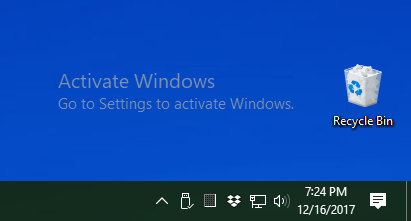 At first it looked like I could sidestep reinstalling everything if I just signed in to a Microsoft-affiliated account such as Skype, but I stopped pursuing that option when it became clear that I would then have a Microsoft account connected with this computer, and that my computer account password would be changed to that Microsoft password.

So, I'm now wondering if I can fix this problem of a watermark that tells me to activate Windows without being coerced to put a Microsoft account into Windows, spending money or reinstalling Windows.

Some specs about the Windows I have installed are:

As suggested, I ran ShowKeyPlus, and it shows an installed key as well as an original key.

From an elevated command prompt run the command: slmgr /upk

This will remove the product key from the system and allow you to enter a new product key.

Proceed to the activate windows screen again, and enter the Windows 7 product key from the original license you had. This should be located on an OEM sticker on the computer or with the the installation media you purchased.

Not the answer you're looking for? Browse other questions tagged windows-10 ssd watermark check-disk or ask your own question.