How to Display a Msgbox directly from CMD

I would like to display a message to the user by using CMD. The way I know to do so is by creating a .vbs (VBScript) file and execute it from CMD like this:

But what I want to do is to display the message without creating any file, directly from CMD. Maybe by using a command to run VBScripts right from CMD.

As others have said there is no way to do this purely with cmd but although that is the title of the question, it seems to me that the part without file is more important to you and under certain circumstances this might be possible.

With powershell it should be possible to run code without anyfile like this:

VBS does not allow the direct execution of code via cscript or wscript but mshta does. You can use it like this (if you need multiple lines use ':' as a delimiter):

As suggested by @wysiwyg, on Pro/Business versions* of Windows you're looking for the Msg command. It's available in all modern versions of Windows (at least as far back as XP). To display a message to the currently logged on user, run the following: 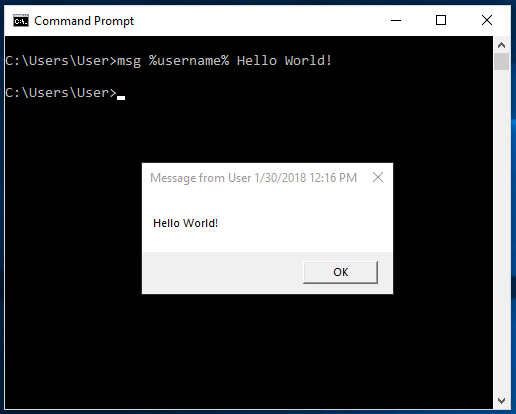 One consideration with this command is that you cannot customize the Titlebar text.

You can learn more about Msg on TechNet.

I needed something similar to this today. Since I couldn't find an external dependency solution I liked since I'm not really a fan of VBScript/Powershell, I went ahead and wrote one:

The message boxes it produces are modal to the current console window. That is, the user can't do anything until they close the dialog. Also, the return code from the MessageBox() call is returned to the caller so that a script can react to whichever button was pressed. And, of course, it supports the full range of options to the MessageBox() Win32 API.

Adding an 80KB executable to the mix might not be everyone's cup of tea. It is statically linked against the VC++ runtime though and supports Unicode, which explains why the file is so large given the minimalistic nature of what it does. And there is a minor issue of not being able to easily pass in newlines from the command-line to display multiline messages. On a minor upside, it displays the dialog in less wall clock time than any of the other solutions presented so far.

Of course, if file size doesn't matter and dialogs create a too "in your face" user experience and/or don't require user interaction, I also ran into this nifty project:

Which displays a popup balloon in the status notification area of the screen using IUserNotification. The downside is that the Notifu executable runs just shy of 240KB. Another unfortunate example that COM creates unnecessary bloat and leaves me wishing that there was a simple, lightweight API for the feature.

For something cross-platform, there's zenity. It's mostly for Linux but there are Mac and Windows ports too. The Windows port of zenity is over 1MB in size because, well, GTK is quite bloated.

I have a way to do this with cmd, but it does basically include a file, but the file is deleted instantly after the vbs is executed. So it isn't really. You can do :

Type+Icon+Action is just basic vbs, for a reference, here. https://therevisionist.org/wp-content/uploads/2016/03/vbscript_msgbox_chart-e1458059002411.jpg?x47750 The code that I shown you makes a file which has VBS code in it, then it executes it using cscript, then it deletes the file after it is executed making it look like it has been summoned by the cmd prompt. To make it look like that more, just use @echo off . Hope this helped!

If you have access to a VB6 compiler, then this one-liner produces a 5.5k executable:

To display a message to a user via RTR I use the command below:

If you don't know who the user is on that machine you use * to send a message to every session on the server name.

Not the answer you're looking for? Browse other questions tagged windows command-line vbscript or ask your own question.

164
Run a batch file in a completely hidden way
0
Display Image With No Window
0
Problem with output from this FOR command
24
Regex Replace from Command line
1
VBscript process disappears
1
PsExec: Access is denied
0
Get PC Serial Number from Registry
0
How to download Google drive file using VBScript or cmd?
2
Close all opened Windows by ONE CMD Command
0
Make a .vbs running in background visible to be able to cancel it