How can I download and install a browser on a new installation of Windows 7E?

In Europe, Windows 7E comes without a browser, it now has a chicken-and-a-egg problem where users don't have a browser to use to download and install a browser.

What is the simplest way that a user with only one internet connected machine, will be able to download and install a browser? FTP, WGET or something else?

I think the EU will sanction a proposal Microsoft made some days ago. Microsoft would provide an easy way to install the major competitors' browers. Read this statement on the Microsoft press releases page.

I can image an installed (but not fully activated) version of Internet Explorer 8 and a sort of ballot screen where you can choose your default browser. If you chose IE, then it will be activated. If you choose another browser, it will be downloaded using the IE engine and installed.

The press release contains this screenshot: 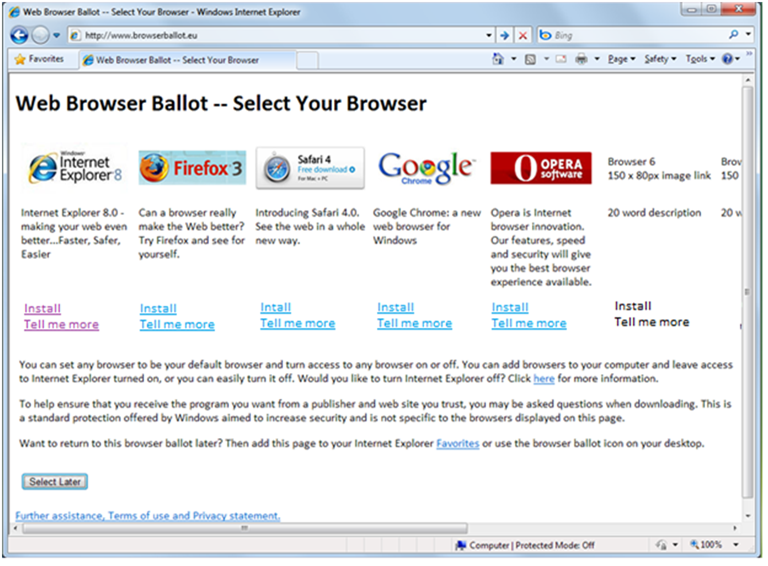 Update 2010-02-23: Microsoft has announced that Windows Update will present the choice as of March 1st, for all existing installations of XP, Vista and Windows 7. An example can be seen at www.browserchoice.eu, but the announcement shows an additional introduction to that, and explains that even existing "pinned" Internet Explorer shortcuts will be removed (which luckily implies the browser itself won't be uninstalled)...

Download and install your browser installer before you upgrade from one of the following sites:

Depending on where you live, you might remember the days when you see all those dial up internet CDs in stores. If Microsoft proposal that were posted by splattne isn't accepted, it is likely when 7 go on general sales in stores that there will be disk of IE people can take.

Of course, one can just download browser installers from another computer and save it onto a USB stick or something.

Windows 7 also includes functionality that allows users to turn off Internet Explorer. If Internet Explorer is turned off, it is not available for use by any users on the computer and cannot be launched for any reason, even if no other browser is available on the system. The program files to launch and use Internet Explorer are removed to a separate storage location as a backup copy so that a user can turn Internet Explorer back on if the user wishes to do so later.

So I guess that Internet Explorer will always be installed on the hard drive, and one can (temporarily) enable it to use it, or to download any other browser.

Download a browser to a flash drive on a friend's computer. Wget is not installed on windows by default, and if there is no browser there would be no way to use FTP unless you installed an FTP client, which requires a browser.

Not the answer you're looking for? Browse other questions tagged windows-7 browser installation or ask your own question.

7
Why is Microsoft forcing users to use non-standard download/installation solutions?
0
Install linux wireless driver from windows?
3
How can I create a Windows 7 user profile without the user logging in?
0
Backtrack 5 R2 can't browse in firefox
0
Is there any way to download a new browser, without the current (and only) one working?
1
How to install a browser without a browser
0
Browser download speeds are extremely slow