my headphones are stereo but I would like the sound from the left and right to be combined then sent to both headphones.

The reason is I'm watching a video where the people speaking are in the right ear as well as the music but they never speak in the left ear (it is not because they on the right side of the screen) If I take the right headphone off then I only hear the music in my left and there is no speaking.

I've noticed on a few occasions that I seemed to get mono sound on both sides when I accidentally pulled the plug partway out of the headphone jack.

This is another situation where a program like JACK, or possibly Virtual Audio Cable, can come in handy.

JACK works like a recording studio patch bay, allowing you to take audio input from one source or program and reroute it through other programs for processing before getting to audio hardware.

For your usage, you'd use JACK to route audio through some type of mixer plugin (VST or similar) that will downmix the stereo output to mono before sending it to the soundcard. Optionally, you might duplicate the mono signal to both left and right channels so the soundcard thinks it's a stereo signal.

I've never tried Virtual Audio Cable, but saw it recommended on another question and it sounds like it does basically the same thing as JACK.

Some video players have options to play only the left channel or only the right channel on both speakers. For example, in VLC Media Player, you can click on Audio, Audio Channels, Right.

(I think that would be better than looking for a Mono setting. A Mono setting will mix the left and right channels together and send the mono mix to both speakers. In your video, that might cause the music to be louder than the voice.)

With any video player that supports windows codecs, you can use FFDshow to remap the audio anyway you like it, in realtime, using the "Mixer" matrix. FFDshow is a very flexible tool for anything you may wish, such as:

What you need is that program. 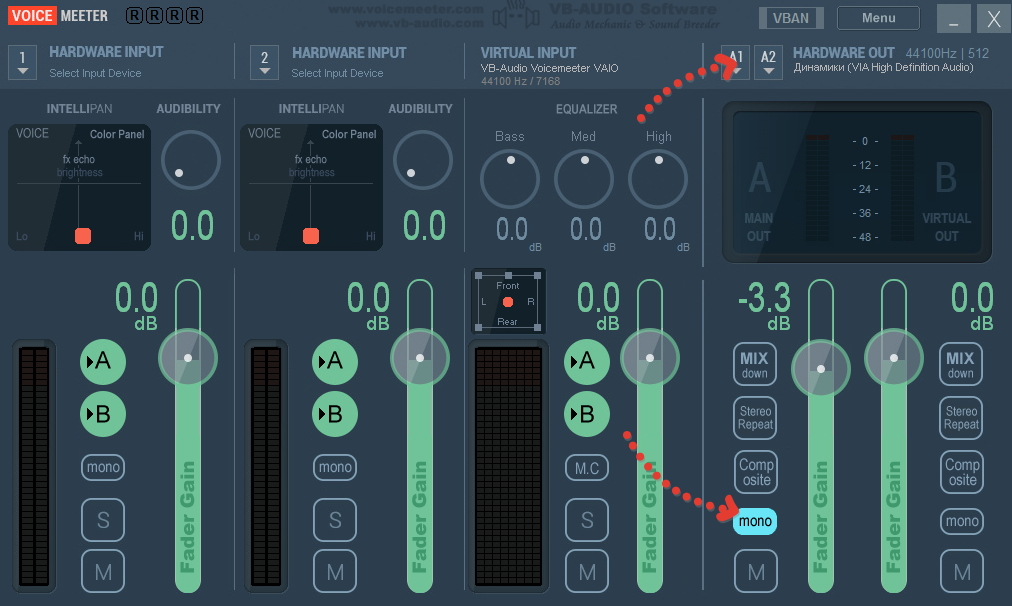 Choose your output device at first arrow and set up mono at second.

One solution that should work on Windows 7, 8, 8.1 and 10 is Equalizer APO (very complete and powerful tool to tweak audio outputs).

After selecting your device, add a Copy filter and set your Left and Right channels to be copied on both channels as shown in my screenshot below.
You may also add a Preamp filter to compensate the Peak gain (shown in red). 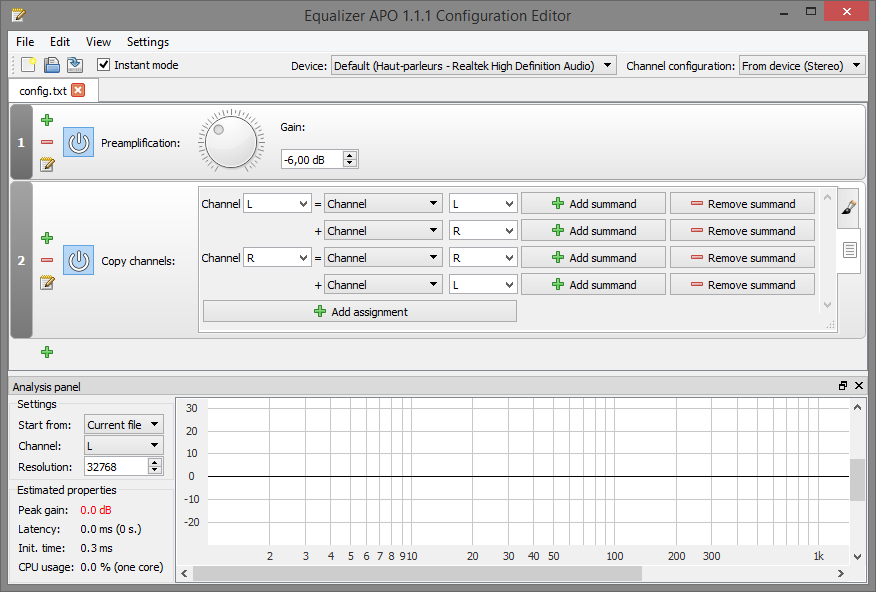 I followed few tutorial and this one is complete : https_://nirklars.wordpress.com/2014/04/26/realtime-digital-audio-processing-using-vst-plugins-in-programs-without-vst-support/

To sum it up it uses VB-Cable Driver and a VST to convert stereo to mono wrapped into VSTHost.

It seems a little bit complicated but once installed all you have to do is :

Go to the control panel, find the program SmartAudio, drag the slider below the headphone graphic left or right depending on which earphone you'd like the audio to come through.

Not the answer you're looking for? Browse other questions tagged windows-7 audio mono stereo mixing or ask your own question.

4
Change headphone output to mono in Windows 8
39
How do I force single (only) channel audio in youtube/flash videos to play in both (left/right) channels?
42
Force Windows XP to output only mono sound
9
How can I set my headphones to mono in Windows 7?
2
Any plugins for Skype that support “Soundboard” usage?
1
How to boost playback volume in real time on media recorded with a very low volume

11
How do you make mono audio track playback in stereo in Ubuntu?
42
Force Windows XP to output only mono sound
3
Merge stereo channels into one side?
1
Any way to enable headphone stereo in games that don't have an explicit switch?
3
Headphones stereo sound in mono
4
How to convert stereo to right-channel mono on Windows 8?
0
Is it possible to use right headphone as left?