Getting “Open with” on top of the Context Menu in Win10 w/o additional software?

As I work on different computers with different programs installed, I often have to search for the Open with-dialog in the Context Menu, as the Context Menu is seemingly sorted alphabetically, and therefore, lots of programs might - and will - stand in front or after it.

So I want to move Open with to the top of the list, as shown here: 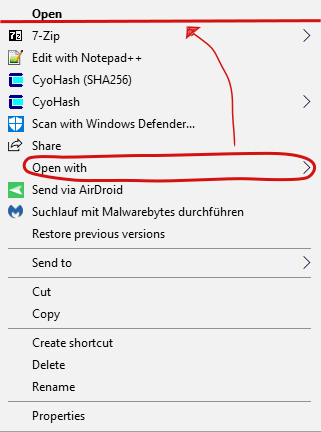 As I don't really like third-party programs that mess around with my Registry and come with all sorts of OpenCandy and the likes, I want to do this the old-fashioned, manual way - and I immediately hit a problem.

A bit of googling around led me to this SO-question called "Order in the Windows Explorer context menu" that in turn led me to this - rather old - blogpost from MSDN stating that:

[...] the sorting is based on the following elements in decision order:

The only solution I can think of is very unelegant: Renaming Open with into something like 1: Open with or 0pen with. I tried that, but unfortunately, this removes Open with completely (as in: it is no longer in the context menu).

Another solution I read of in the SO-question was to place Open with inside another section of the Context Menu. I would like to avoid this, too, as it would only help slightly , because the amount of programs would still influence the position.

Is there any way to get Open with on top via the manual way, e.g. via Regedit or PowerShell?

Note: To me, it does not really matter if it comes before or after Open.

Instead of changing position of regular Open with from HKCR\*\shellex\contextmenuhandlers in the context menu popup, you can add next other Open with under HKCR\*\shell and force its position to the top in the popup as follows:

Result (an example with a .png file): 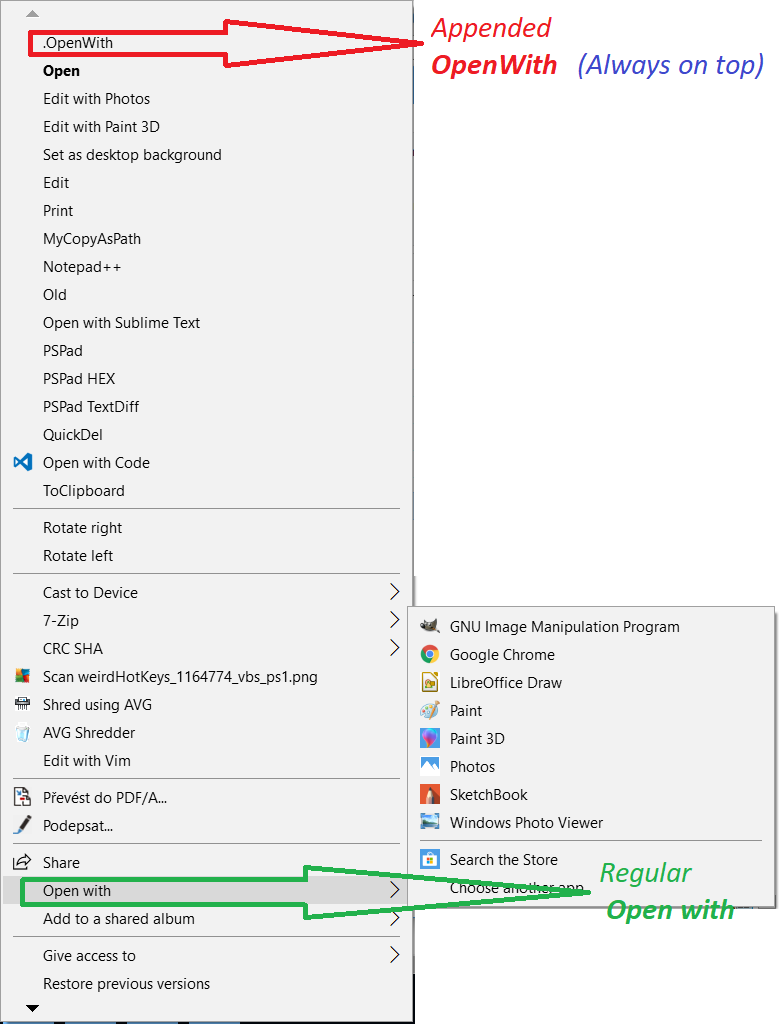 To revert changes back, read and follow Deleting Registry Keys and Values

To delete a registry key with a .reg file, put a hyphen (-) in front of the RegistryPath in the .reg file.

In this case, to delete the .OpenWith subkey from the HKEY_CLASSES_ROOT\*\shell registry key, use:

Not the answer you're looking for? Browse other questions tagged windows-10 windows-explorer windows-registry context-menu or ask your own question.