How to get data from web using Cell values to assemble URL to pull from? 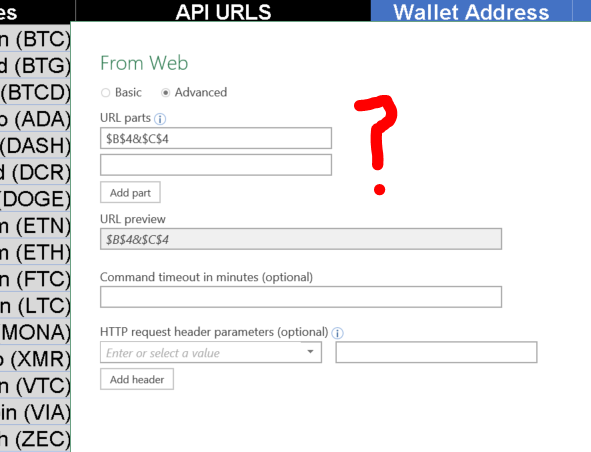 How do I go about using cell references to assemble a URL that excel can use to get data from the web with? Basically I'm trying to use cell values to assemble a full URL with query string to return the query result into another cell.

I have a worksheet with API URLs in one column and query strings in the next column over. I want to take say cell $B$2 (URL) and cell $C$2 (query string) to get URL results from =$B$2&$C$2

Most of the results would just be a number value and not have to be interpreted while other results are similar to JSON results and have to be navigated/burned down to the correct position to the desired result.

Get Data from web in Excel does a good job of this if I give it the URL natively... but.. the issue is trying to use that functionality in excel but instead just having it assemble the URL from cell references instead of putting in the URL natively in that get data from web form.

Any ideas? Thank you

Edit:
I reached out to one of my old professors that taught excel, he said he wasn't sure but suggested that a VBA script could be an option.

As far as I understand, you'll have to create a query table for each row, because the data URL for each row will be different/unique. Alternatively, you could use a single query table, and iterate over all rows, updating the table's connection URL in each iteration, and retrieving the fetched data into the appropriate row, using a VBA snippet like the following (disclaimer: haven't tested this):

Not the answer you're looking for? Browse other questions tagged microsoft-excel worksheet-function vba microsoft-excel-2016 query or ask your own question.

1
How to keep cell references when querytable columns change
0
Excel: Force "Get data from web" web scrapper to use the exact url
0
How to get multiple unique results from a data matrix by Match/Index
0
How can I pull in dates from a cell next to the one I'm querying?
1
How to show a cell formula with cell values instead of cell references?
0
Import XML or JSON data into Excel using URL from a cell