I recently sent my laptop to service and I believe they changed the motherboard. Before that I could get 1000mbps, but now the connection is stuck at 100mbps as you can see in the screenshot: 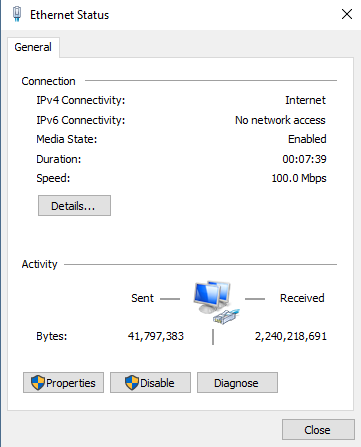 The router and the cable remained the same. I tried 2 different versions of drivers, including the last one on the realtek website. I performed a clean install of the windows, the speed won't budge.

EDIT: The laptop is an ASUS GL752VW

I know that most people think it's the cable since that solved the issue in other similar questions, but I tried other cables and the problem persists and as I said, I had 1gbps connection before I sent my laptop to service with the very same cable I use now.

I too had similar issues... connect PC to modem and I get 1GBPS, connect through router (tried 2 different kinds) and get 100Mbps. With all the plugging in and out, the PC suddenly registered 1Gbps. So to anyone who is going through this. I really suggest not only swapping cables... but plugging in-out a few times, maybe even make sure there is no dirt in the socket etc.. because cables that consistently gave me 100mbps suddenly gave me 1 gbps. also I had a situation where a particular cable went from 1 Gbps to suddenly dropping to 100mbps...

Not the answer you're looking for? Browse other questions tagged networking network-adapter gigabit-ethernet or ask your own question.

0
How to achieve reliable Gigabit Ethernet Link with my Acer Aspire Revo R3610?
3
Gigabit Ethernet switch from 1Gbps to 100Mbps back and forth
1
Can't reach 1Gbps using 20m of cat5e cable
1
Why am I getting only 100Mbps out of my 500Mbps subscription?
0
Autonegotiated link speed different between devices using exact same cable
1
Network Card speed stuck at 100 Mb/s
0
Unable to get 1Gbps Connection Speed