Laptop was acting really weird, and copy and seek times were really slow, so I decided to scan the hard drive surface. I have a couple hundred bad sectors all clustered up in last couple of gigabytes on the hard drive. If I leave that part out unformatted, will it work right?

edit: This is the situation after testing. There is visible chaos at the end. All Sentinel or HDD Regenerator tests and repairs freeze when processes reaches 99%. It found additional 1 bad sector in the middle and a weird darker green pattern at the upper part of the image :)

Chkdsk with /f or /r also freezes at 99%. Done full windows format. People say that it should remap the bad sectors, but I'm not sure it did here any good.I will just try to make a 100 GB partition for system, and see how it works. 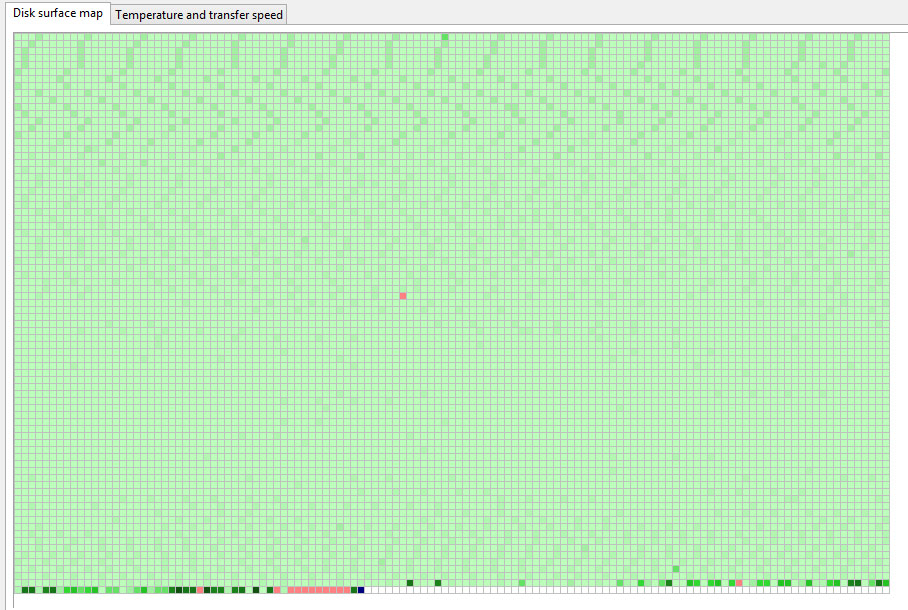 If the bad sectors are not used, then they should not cause any issues. This is assuming there isnt something more seriously wrong with the hard drive.

If the errors are all towards the very end of the disk, that almost sounds like there may be some sort of compatibility issue that causes the software to not successfully reference the end sectors. That hasn't seemed like as much of an issue in recent years as LBA48 takes care of capacities in the petabyte range, and drives aren't that large yet.

However, if this isn't the result of a software bug, then you likely have a physical defect. The typical advice I've heard most often is that once a drive has some physically bad sectors, such drives tend to be far more prone to have additional physical/mechanical problems in the near future. So, you are advised to back up all desired data and then not use that drive for storing any important data.

(Often people say to not use the drive at all, but in some circumstances, it could be useful. e.g., as a cache for some sort of personal video media streaming, since if data corrupted one frame then it might really not impact you negatively. But for any data that needs to have integrity, which is probably most of the data you would care about, including computer software code which you want to behave correctly, do not use such a broken drive for such data.)

I want to suggest the following software that can isolate bad sectors:

Modern hard disk have spare sectors for problems of bad sectors, so the question is if your visible bad sectors are only the tip of the iceberg.

For analyzing the status of the disk, you need to consult its S.M.A.R.T. data.

A nice utility for this is Speccy. Examine well the data found in the "Storage" section, and especially the S.M.A.R.T data. Speccy will tell you if the readings are normal.

If you have hundreds of problems on the disk, it is failing. Junk it or continue to use it at your own risk.

For better interpretation of S.M.A.R.T. values, see the articles :

Not the answer you're looking for? Browse other questions tagged hard-drive partitioning bad-sectors or ask your own question.

3
Fix "bad" NTFS Partition
2
Bad sectors vs spare/reserve sectors and how the OS and disk interpret them
0
Bad performance on Windows 7 with Bad sectors
0
Why does my Windows 7 cannot fix hard drive and normally boot as usual?
0
S.M.A.R.T. showing different values than some other time before
4
Full formatting, HDD controllers, and bad-sector locking
0
2TB HDD, bad sectors in one area around 3GB, can I safely use it if partitioned beyond that defective area?
1
Detecting bad blocks/ sectors on modern (spinning) drives and script to monitor SMART info